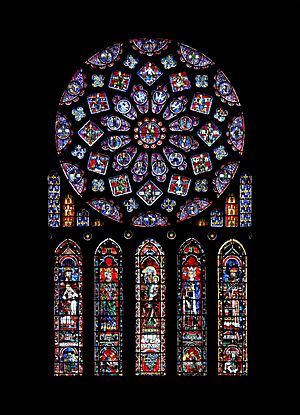 The north transept rose of Chartres Cathedral. It represents the Virgin Mary as Queen of Heaven, surrounded by Biblical kings and prophets. The window includes the arms of France and Castile

Stained glass is glass coloured by adding metallic salts when it is made. The coloured glass is made into stained glass windows. Small pieces of glass are arranged to form patterns or pictures. The glass is held together by strips of lead and supported by a rigid frame.

Painted details and yellow stain are often used to improve the design. The term stained glass is also applied to windows in which the colours have been painted onto the glass and then fused to the glass in a kiln.

Stained glass is much used in Christian art but other themes are not rare. It is still popular today, and often called art glass. It is often used in luxury homes and commercial buildings.

Some colours are added to stained glass by the salts of:

All content from Kiddle encyclopedia articles (including the article images and facts) can be freely used under Attribution-ShareAlike license, unless stated otherwise. Cite this article:
Stained glass Facts for Kids. Kiddle Encyclopedia.