Ostend is a Belgian coastal city and municipality, located in the province of West Flanders. It comprises the boroughs of Mariakerke, Raversijde, Stene and Zandvoorde, and the city of Ostend proper – the largest on the Belgian coast.

In earlier times, Ostend was a small village built on the east-end (oost-einde) of an island (originally called Testerep) between the North Sea and a beach lake. Although small, the village rose to the status of "town" around 1265 when the inhabitants were allowed to hold a market and to build a market hall.

The major source of income for the inhabitants was fishing. The North Sea coastline has always been rather unstable and in 1395 the inhabitants decided to build a new Ostend behind large dikes and further away from the always-threatening sea. 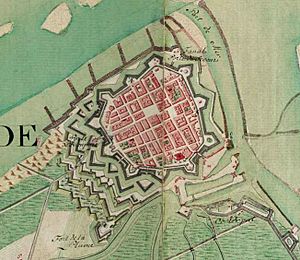 Ostend on the Ferraris map (around 1775) 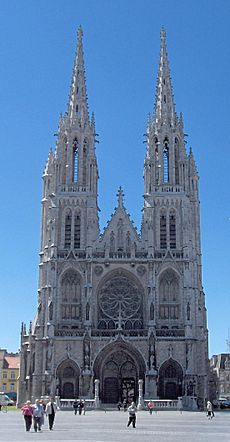 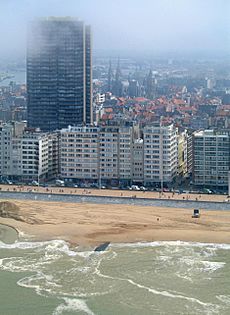 The strategic position on the North Sea coast had major advantages for Ostend as a harbour but also proved to be a source of trouble. The town was frequently taken, ravaged, ransacked and destroyed by conquering armies. The Dutch rebels, the Gueuzen, took control of the town. The Siege of Ostend, 1601 to 1604, of which it was said that "the Spanish assailed the unassailable and the Dutch defended the indefensible", cost a combined total of more than 80,000 dead or wounded, making it the single bloodiest battle of the Eighty Years' War. This shocking event set in motion negotiations that led to a truce several years later. When the truce broke down, it became a Dunkirker base.

After this era, Ostend was turned into a harbour of some importance. In 1722, the Dutch again closed off the entrance to the world's biggest harbour of Antwerp, the Westerschelde. Therefore, Ostend rose in importance because the town provided an alternative exit to the sea. The Belgium Austriacum had become part of the Austrian Empire. The Austrian Emperor Charles VI granted the town the trade monopoly with Africa and the Far-East. The Oostendse Compagnie (Ostend trade company) was allowed to found colonies overseas. However, in 1727 the Oostendse Compagnie was forced to stop its activities because of Dutch and British pressure. The Netherlands and Britain would not allow competitors on the international trade level. Both nations regarded international trade as "their" privilege.

On 19 September 1826 the local artillery magazine exploded. At least 20 people were killed and a further 200 injured. The affluent quarter of d'Hargras was levelled and scarcely a building in the city escaped damage. Disease followed the devastation leading to further deaths.

The harbour of Ostend continued to expand because the harbour dock, as well as the traffic connections with the hinterland, were improved. In 1838, a railway connection with Brussels was constructed. Ostend became a transit harbour to England in 1846 when the first ferry sailed to Dover. Important for the image of the town was the attention it started to receive from the Belgian kings Leopold I and Leopold II. Both monarchs liked to spend their holidays in Ostend. Important monuments and villas were built to please the Royal Family, including the Hippodrome Wellington horse racing track and the Royal Galleries. The rest of aristocratic Belgium followed and soon Ostend became known as "the queen of the Belgian sea-side resorts".

In 1866, Ostend was the venue for a crucial meeting of exile Spanish Liberals and Republicans which laid the framework for a major uprising in their country , culminating in Spain's Glorious Revolution two years later.

Ostend (in common with nearly the entirety of the country) was occupied by German forces and used as an access point to the sea for submarines and other light naval forces for much of the duration of World War I. As a consequence the port was subjected to two naval assaults by the Royal Navy.

The town hosted all of the sailing events for the 1920 Summer Olympics for Antwerp. Only the finals of the 12 foot dinghy were sailed in Amsterdam. Ostend also hosted the polo events.

World War II involved a second occupation of the town by Germany within a period of little more than twenty years; an occupation which it shared this time with most of northern Europe. Both conflicts brought significant destruction to Ostend. In addition, other opulent buildings which had survived the wars were later replaced with structures in the modernist architecture style.

Ostend is known for its sea-side esplanade, including the Royal Galleries of Ostend, pier, and fine-sand beaches. Ostend is visited by many day-trippers heading to the beaches, especially during July and August. Tourists from inland Belgium and foreigners mostly arrive by train (day trips) and head for the closest beach area, the Klein Strand, located next to the pier. The locals and other residents in Belgium usually occupy the larger beach (het Groot Strand).

Near the beach is a well-preserved section of the fortified Atlantic Wall, open to the public as the Atlantic Wall Open Air Museum located in Raversijde. One can walk through the streets around Het Vissersplein. At certain times, there are markets in the neighbourhood streets and in the summer the Vissersplein has music festivals. The Vissersplein (Bonenstraat/Kadzandstraat) is a car free zone with many brasseries where patrons can sit outside and have a drink. Towards the port side there are many little fish outlets, and beyond that the ferries can be observed docking.

The James Ensor museum can be visited in the house where the artist lived from 1917 until 1949.

The Mu.Zee (merged from the Provinciaal Museum voor de Moderne Kunst and the Museum voor Schone Kunsten) is the museum of modern art (from the 1830s to the present) and displays works of noted local painters such as James Ensor, Leon Spilliaert, Constant Permeke and the revolutionary post-war Belgian COBRA movement amongst others.

Ostend has a maritime temperate climate, influenced by winds from the North Sea, making summers cooler than inland Europe. 24-hour average temperatures below the freezing point is a rare occurrence. According to the Köppen Climate Classification system, Ostend has a marine west coast climate, abbreviated "Cfb" on climate maps.

Ostend–Bruges International Airport located 5km from Ostend is primarily a freight airport but offers passenger flights to leisure destinations in Southern Europe and Turkey. TUI fly Belgium has its headquarters in Ostend. TAAG Angola Airlines's Ostend offices are on the grounds of Ostend Airport.

Ostend formerly had busy ferry routes to Dover and Ramsgate, but the last of these services ended with the failure of TransEuropa Ferries in 2013.

All content from Kiddle encyclopedia articles (including the article images and facts) can be freely used under Attribution-ShareAlike license, unless stated otherwise. Cite this article:
Ostend Facts for Kids. Kiddle Encyclopedia.