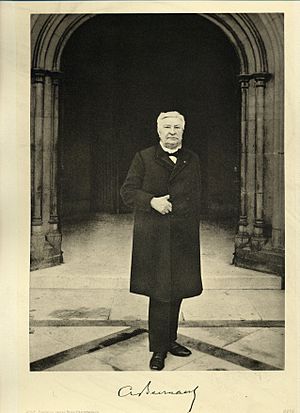 Born in Ostend in the United Kingdom of the Netherlands 1829, he entered the Faculty of Law at the Catholic University of Leuven at age 17. He finished five years later with greatest distinction.

He was elected to the Chamber of Deputies in 1873, and became Minister of Public Works under Jules Malou, greatly improving the rail, canal and road systems. After his tenure as Prime Minister, he represented Belgium at the Hague conventions of 1899 and 1907. He was also co-winner (with Paul d'Estournelles de Constant) of the Nobel Peace Prize in 1909 for his work at the Permanent Court of Arbitration. He was chosen as president of the panel established under the rules of that organization in the Sarvarkar Case in 1911. A year later, he died in Lucerne, Switzerland. A lawyer by profession, he served as Minister of Public Works. He served as prime minister and Minister of Finance from 1884 to 1894. He held the post of president of the international law of association from 1903 to 1905. He was Belgium's first representative to the Hague peace conferences in 1899 and 1907. In the year 1912 he was hospitalised in Lucerne, where he died of pneumonia.

He was the primary force behind proposals to unify international maritime law. A number of conventions dealing with collision and assistance at sea drawn up in 1910 were soon signed by many nations.

All content from Kiddle encyclopedia articles (including the article images and facts) can be freely used under Attribution-ShareAlike license, unless stated otherwise. Cite this article:
Auguste Beernaert Facts for Kids. Kiddle Encyclopedia.