West Flanders (Dutch: West-Vlaanderen; French: (Province de) Flandre-Occidentale; German: Westflandern) is one of the five provinces of the Flemish Region, also named Flanders, and also is one of the ten provinces of Belgium. It is the westernmost province in Flanders.

The whole Belgian North Sea coast, an important tourism destination, lies in West Flanders. A tram line runs the length of the coast, from De Panne on the French border, via the port of Ostend (Dutch: Oostende), to Knokke-Heist on the Dutch frontier. 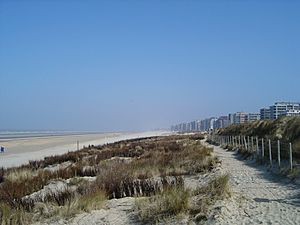 The Belgian coast near De Panne

The province has an area of 3,125 km2 (1,207 sq mi). In terms of area, it is the largest province in the Flemish Region and the fifth largest in Belgium.

West Flanders has a very flat landscape with polders, except for a row of dunes along the coast and an area with small hills known as the 'Westvlaamse Bergen', with the Kemmelberg (159 m) being the highest point in the province.

The main rivers in the province are the Leie (French: Lys) and Yser (Dutch: IJzer). The Yser flows into the North Sea at the town of Nieuwpoort and the Leie flows into the Scheldt river.

In the north of the province, most industry is concentrated in and around the cities of Bruges and Ostend. Both cities also have important seaports: the port of Bruges-Zeebrugge and the port of Ostend. The south is known for its textile industry.

Tourism is also an important industry in West Flanders. Major touristic attractions include the Belgian coast, the historic centre of Bruges, and places where there were battles around Ypres during World War I.

The province of West Flanders is divided into 8 arrondissements and a total of 64 municipalities. 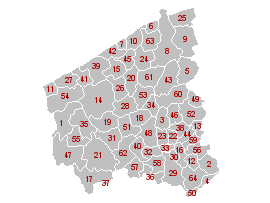 All content from Kiddle encyclopedia articles (including the article images and facts) can be freely used under Attribution-ShareAlike license, unless stated otherwise. Cite this article:
West Flanders Facts for Kids. Kiddle Encyclopedia.