East Flanders (Dutch: Oost-Vlaanderen, French: (Province de) Flandre-Orientale, German: Ostflandern) is a province of Flanders, one of the three regions of Belgium.

Its capital, and also the largest city of the province, is Ghent (Dutch: Gent, French: Gand).

East in East Flanders means that it is in eastern part of Flanders, a region that forms part of the present Belgium. The word Flanders refers to the historic county of Flanders and appears for the first time in the year 358 under the name pagus Flandrensis (pagus is a Latin word meaning a very small town, with only few houses).

The pagus Flandrensis region was a coastal area with large tidal channels and green marshes where sheep farmers lived.

The modern province of East Flanders was the old Escaut department, created in 1795 during the First French Empire in the eastern part of the County of Flanders.

In 1815, during the creation of the Kingdom of the Netherlands, the department became the province of East Flanders.

East Flanders borders (clockwise from the North) on the Netherlands and in Belgium on the provinces of Antwerp, Flemish Brabant (both in Flanders), of Hainaut (Wallonia) and of West Flanders (Flanders).

The capital and biggest city is Ghent, also the second largest city in the Flemish Region. Other smaller cities are Aalst, Sint-Niklaas and Dendermonde in the east of the province.

Its highest point is Hotondberg, 150 m (492 ft) high, in the municipality of Kluisbergen, Oudenaarde district.

The main river in the province is the Scheldt (Dutch: Schelde, French: Escaut); it merges with the Leie in Ghent. The Dender flows into the Scheldt in the city of Dendermonde.

The province of Hainaut is divided into six arrondissements (Aalst, Dendermonde, Eeklo, Ghent, Oudenaarde and Sint-Niklaas) and a total of 65 municipalities. 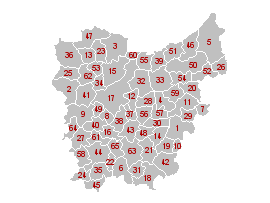 All content from Kiddle encyclopedia articles (including the article images and facts) can be freely used under Attribution-ShareAlike license, unless stated otherwise. Cite this article:
East Flanders Facts for Kids. Kiddle Encyclopedia.