Antwerp (Dutch: Antwerpen, French: Anvers) is the northernmost province both of the Flemish Region, also called Flanders, and of Belgium.

Antwerp is largest city of the province and its capital; the Port of Antwerp is part of the city.

The modern province of Antwerp was the old Deux-Nèthes department, created in 1795 during the First French Empire in the northern part of the Duchy of Brabant.

The province of Antwerp borders on the Netherlands and the Belgian provinces of Limburg, Flemish Brabant and East Flanders. 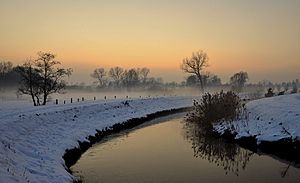 Its highest point is Beerzelberg, 51.6 m (169.3 ft) high, in the municipality of Putte, Mechelen district. The lowest point of the province with 4 m (13.1 ft) high, lies in the valley of the Grote Nete river near Lier.

The main river in the province is the Scheldt (Dutch: Schelde, French: Escaut). Others rivers are Rupel, Grote Nete, Kleine Nete.

The province of Antwerp is divided into three arrondissements (Antwerp, Mechelen and Turnhout) and a total of 70 municipalities. 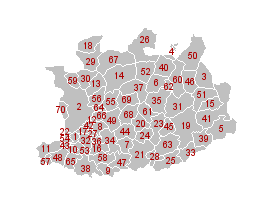 All content from Kiddle encyclopedia articles (including the article images and facts) can be freely used under Attribution-ShareAlike license, unless stated otherwise. Cite this article:
Antwerp (province) Facts for Kids. Kiddle Encyclopedia.