Limburg is the easternmost of the five provinces of modern Flanders, which is one of the three main political and cultural sub-divisions of modern Belgium. Its capital is Hasselt.

Limburg is located west of the Meuse (Dutch Maas) river, upon which it borders the similarly named province Limburg of the Netherlands. It also borders on the Walloon province of Liège to the south, with which it also has historical ties. To the north and west are the old territories of the Duchy of Brabant, the Flemish provinces of Flemish Brabant and Antwerp to the west, and the Dutch province of North Brabant to the north. 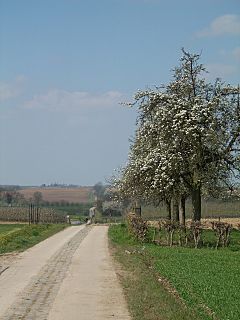 The province of Limburg has an area of 2,414 km2 (932 sq mi) with a population of 849,404 and a density of 351.9 inhabitants per km². The province is divided into three arrondissements (arrondissementen in Dutch) with 44 municipalities. Among these municipalities are the current capital Hasselt, the early medieval capital Borgloon, Genk, Diepenbeek (home to Hasselt University), and Tongeren, the only Roman city in the province and regarded as the oldest city of Belgium.

The municipality of Voeren is geographically detached (an exclave) from Limburg and the rest of Flanders, with the Netherlands to the north and the Walloon province of Liège to the south. This municipality was established by the municipal reform of 1977.

The centre of Belgian Limburg is crossed east to west by the Demer river and the Albert Canal, which run similar paths. The Demer river's drainage basin covers most of the central and southern part of the province, except for the southeastern corner, where the Jeker (in French: (le) Geer) runs past Tongeren and into the Maas river (in French: (la) Meuse) at Maastricht.

The eastern border of the province corresponds to the western side of the Maas, which originates in France. It's drainage basin includes not only the Jeker but most of the northern part of Belgian Limburg.

The province of Limber is divided into 3 arrondissements (Hasselt, Maaseik and Tongeren) and a total of 44 municipalities. 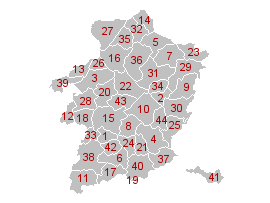 Population on 1 January or on 1 July of each year.

All content from Kiddle encyclopedia articles (including the article images and facts) can be freely used under Attribution-ShareAlike license, unless stated otherwise. Cite this article:
Limburg (Belgium) Facts for Kids. Kiddle Encyclopedia.