Kids Encyclopedia Facts
Not to be confused with Western world or Western European Union.

Western Europe is the region of Europe farthest from Asia, with the countries and territories included varying depending on context.

After the beginning of foreign exploration in the Age of Discovery, roughly from the 15th century, the concept of Europe as "the West" began gradually to be distinguished from and eventually to replace the hitherto dominant use of "Christendom" as the preferred means of self-definition within the region. Later, during the Age of Enlightenment, the concept of "Eastern Europe" was created to consolidate and purify the concept of "Western Europe". 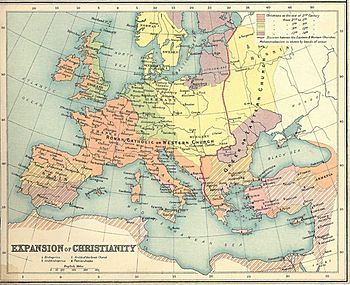 Schism of 1054 (East–West Schism) in Christianity, the predominant religion in Europe at the time

Prior to the Roman conquest, a large part of Western Europe had adopted the newly developed La Tène culture. As the Roman domain expanded, a cultural and linguistic division appeared between the mainly Greek-speaking eastern provinces, which had formed the highly urbanized Hellenistic civilization, and the western territories, which in contrast largely adopted the Latin language. This cultural and linguistic division was eventually reinforced by the later political east–west division of the Roman Empire. The Western Roman Empire and the Eastern Roman Empire controlled the two divergent regions between the 3rd and the 5th centuries.

The division between these two was enhanced during Late antiquity and the Middle Ages by a number of events. The Western Roman Empire collapsed, starting the Early Middle Ages. By contrast, the Eastern Roman Empire, mostly known as the Greek or Byzantine Empire, survived and even thrived for another 1000 years. The rise of the Carolingian Empire in the west, and in particular the Great Schism between Eastern Orthodoxy and Roman Catholicism, enhanced the cultural and religious distinctiveness between Eastern and Western Europe.

After the conquest of the Byzantine Empire, center of the Eastern Orthodox Church, by the Muslim Ottoman Empire in the 15th century, and the gradual fragmentation of the Holy Roman Empire (which had replaced the Carolingian Empire), the division between Roman Catholic and Protestant became more important in Europe than that with Eastern Orthodoxy.

In East Asia, Western Europe was historically known as taixi in China and taisei in Japan, which literally translates as the "Far West". The term Far West became synonymous with Western Europe in China during the Ming dynasty. The Italian Jesuit priest Matteo Ricci was one of the first writers in China to use the Far West as an Asian counterpart to the European concept of the Far East. In Ricci's writings, Ricci referred to himself as "Matteo of the Far West". The term was still in use in the late 19th and early 20th centuries. 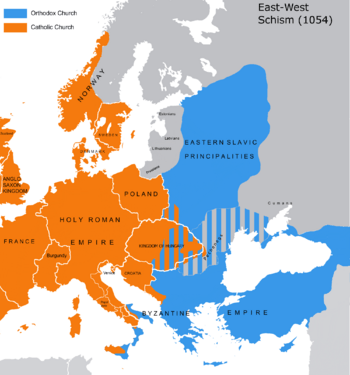 Christianity is the largest religion in Western Europe. According to a 2018 study by the Pew Research Center, 71.0% of Western Europeans identified as Christians. 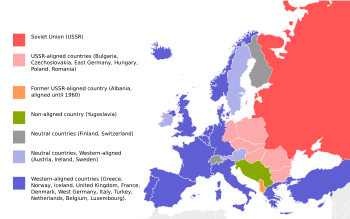 Political spheres of influence in Europe during the Cold War; neutral countries (shaded gray or light blue) considered informally Western-oriented but not formally aligned to the West

During the four decades of the Cold War, the definition of East and West was rather simplified by the existence of the Eastern Bloc. Historians and social scientists generally view the Cold War definition of Western and Eastern Europe as outdated or relegating.

During the final stages of World War II, the future of Europe was decided between the Allies in the 1945 Yalta Conference, between the British Prime Minister, Winston Churchill, the U.S. President, Franklin D. Roosevelt, and the Premier of the Soviet Union, Joseph Stalin.

Post-war Europe would be divided into two major spheres: the Western Bloc, influenced by the United States, and the Eastern Bloc, influenced by the Soviet Union. With the onset of the Cold War, Europe was divided by the Iron Curtain. This term had been used during World War II by German Propaganda Minister Joseph Goebbels and, later, Count Lutz Schwerin von Krosigk in the last days of the war; however, its use was hugely popularized by Winston Churchill, who used it in his famous "Sinews of Peace" address on 5 March 1946 at Westminster College in Fulton, Missouri:

From Stettin in the Baltic to Trieste in the Adriatic an iron curtain has descended across the Continent. Behind that line lie all the capitals of the ancient states of Central and Eastern Europe. Warsaw, Berlin, Prague, Vienna, Budapest, Belgrade, Bucharest and Sofia; all these famous cities and the populations around them lie in what I must call the Soviet sphere, and all are subject, in one form or another, not only to Soviet influence but to a very high and in some cases increasing measure of control from Moscow.

Although some countries were officially neutral, they were classified according to the nature of their political and economic systems. This division largely defines the popular perception and understanding of Western Europe and its borders with Eastern Europe. 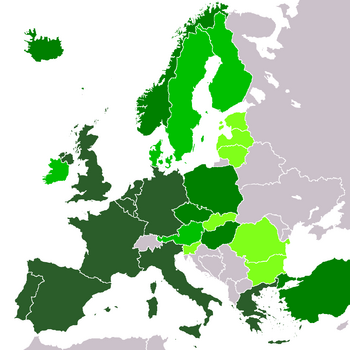 The world changed dramatically with the fall of the Iron Curtain in 1989. West Germany peacefully absorbed East Germany, in the German reunification. Comecon and the Warsaw Pact were dissolved, and in 1991, the Soviet Union ceased to exist. Several countries which had been part of the Soviet Union regained full independence. 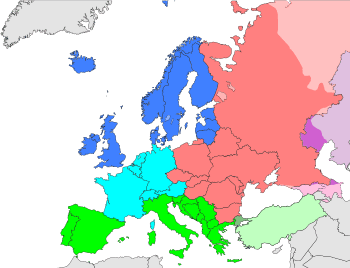 The United Nations geoscheme is a system devised by the United Nations Statistics Division (UNSD) which divides the countries of the world into regional and subregional groups, based on the M49 coding classification. The partition is for statistical convenience and does not imply any assumption regarding political or other affiliation of countries or territories.

In the UN geoscheme, the following countries are classified as Western Europe:

Geography: Realms, Regions, and Concepts has been published since 1971 and now in its 17th edition. It was written by the authors Jan Nijman, Peter O. Muller and Harm J. de Blij. It is used in many US schools to teach students world geography. 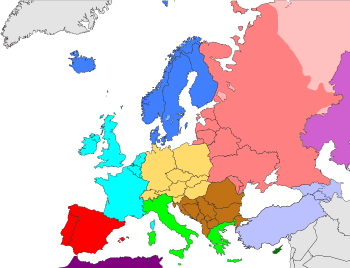 The CIA classifies seven countries as belonging to "Western Europe": 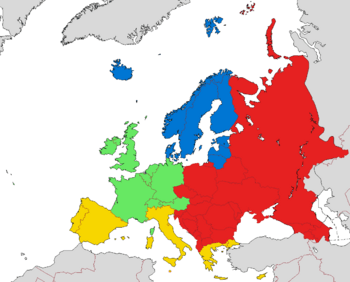 EuroVoc is a multilingual thesaurus maintained by the Publications Office of the European Union. In this thesaurus, the countries of Europe are grouped into sub-regions. The following countries are included in the sub-group Western Europe:

Western European and Others Group

The Western European and Others Group is one of several unofficial Regional Groups in the United Nations that act as voting blocs and negotiation forums. Regional voting blocs were formed in 1961 to encourage voting to various UN bodies from different regional groups. The European members of the group are:

In addition, Australia, Canada, Israel and New Zealand are members of the group, with the United States as observer.

Using the CIA classification strictly would give the following calculation of Western Europe's population. All figures based on the projections for 2018 by the Population Division of the United Nations Department of Economic and Social Affairs.

Using the CIA classification a little more liberally and including "South-Western Europe", would give the following calculation of Western Europe's population. 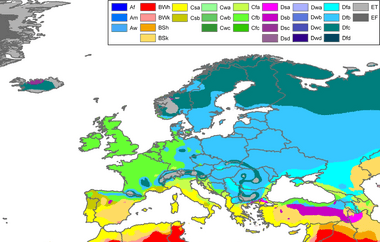 European climate. The Köppen-Geiger climates map is presented by the Climatic Research Unit of the University of East Anglia and the Global Precipitation Climatology Center of the Deutscher Wetterdienst.

The climate of Western Europe varies from subtropical and semi-arid in the coasts of Italy, Portugal and Spain to alpine in the Pyrenees and the Alps. The Mediterranean climate of the south is dry and warm. The western and northwestern parts have a mild, generally humid climate, influenced by the North Atlantic Current.

Western European languages mostly fall within two Indo-European language families: the Romance languages, descended from the Latin of the Roman Empire; and the Germanic languages, whose ancestor language (Proto-Germanic) came from southern Scandinavia. Romance languages are spoken primarily in the southern and central part of Western Europe, Germanic languages in the northern part (the British Isles and the Low Countries), as well as a large part of Northern and Central Europe.

Other Western European languages include the Celtic group (that is, Irish, Scottish Gaelic, Manx, Welsh, Cornish and Breton) and Basque, the only currently living European language isolate.

Multilingualism and the protection of regional and minority languages are recognized political goals in Western Europe today. The Council of Europe Framework Convention for the Protection of National Minorities and the Council of Europe's European Charter for Regional or Minority Languages set up a legal framework for language rights in Europe.

Switzerland and Luxembourg have the highest average wage in the world, in nominal and PPP, respectively. Norway ranks highest in the world on the Social Progress Index.

All content from Kiddle encyclopedia articles (including the article images and facts) can be freely used under Attribution-ShareAlike license, unless stated otherwise. Cite this article:
Western Europe Facts for Kids. Kiddle Encyclopedia.