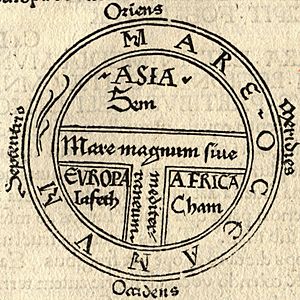 This T-and-O map shows the known world of 1472 in form of a cross inscribed within an orb. It remakes geography in the service of Christian iconography. More detailed versions place Jerusalem at the centre of the world.

Christendom or the Christian world, in the widest sense, means Christianity as a territorial phenomenon. That means: those countries where most people are Christians and because of that are part of Christendom.

People have used the term Christendom for the medieval and renaissance understanding of the Christian world as one single Body of Christ with Christ as the head. With the rise of Modernity and the Reformation during the early 16th century the understanding changed to a modern idea of a tolerant and diverse society that consists of many different communities.

Christianity is the predominant religion in Europe, Russia, the Americas, Oceania, the Philippines, Eastern Indonesia, Southern Africa, Central Africa and East Africa. There are also large Christian communities in other parts of the world, such as China, India and Central Asia, where Christianity is the second-largest religion after Islam. The United States is the largest Christian country in the world by population, followed by Brazil and Mexico.

The estimated number of Christians in the world ranges from 2.2 billion to 2.4 billion people. The faith represents approximately one-third of the world's population and is the largest religion in the world, with the three largest groups of Christians being the Catholic Church, Protestantism, and the Eastern Orthodox Church. The largest Christian denomination is the Catholic Church, with an estimated 1.2 billion adherents.

All content from Kiddle encyclopedia articles (including the article images and facts) can be freely used under Attribution-ShareAlike license, unless stated otherwise. Cite this article:
Christendom Facts for Kids. Kiddle Encyclopedia.