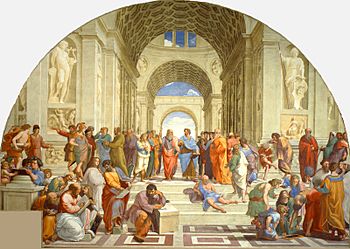 The School of Athens by Raphael. This Renaissance painting shows an imaginary scene from Ancient Greece, with Greek philosophers, writers, artists, and mathematicians. Raphael used the faces of people from his own time. Leonardo da Vinci was his model for Plato, the philosopher with the white beard in the center.

The Renaissance is a period in the history of Europe beginning in about 1400, and following the Medieval period.

During the Renaissance, there were many famous artists, many writers and many philosophers. Many people studied mathematics and different sciences. A person who is clever at a great number of things is sometimes called a "Renaissance man". Leonardo da Vinci, who was a painter, a scientist, a musician and a philosopher, is the most famous Renaissance Man.

The Renaissance started in Italy but soon spread across the whole of Europe. In Italy, the time is divided into three periods:

Following the Mannerist period was the Baroque period which also spread across Europe from about 1600. Outside Italy, it can be hard to tell where the Renaissance period ends and Baroque begins.

Causes of the Renaissance 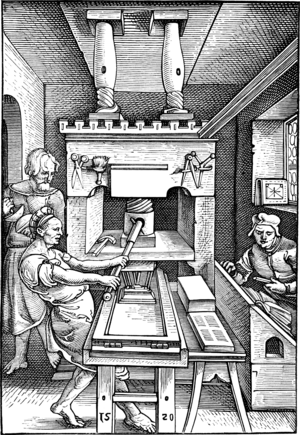 In the Middle Ages, most artistic, legal, and historical production took place in and around books, which were produced in and belonged to monasteries, churches, universities, and the individuals who could afford them. Books were produced entirely by hand, which is why they were called manuscripts; illuminated manuscripts refer to those with hand-colored, drawn, and gilded pictures.

Most books at that time were written in Latin, Greek, and Roman which was used in the Catholic Church. Only priests and well-educated people read Latin then. People were forbidden by law from translating the Bible into Italian, English, German, French, or other "local" languages.

Around 1440 the first printed books were made in Europe. The way of printing quickly improved so that large books like the Bible could be made and sold cheaply. It took 300 calf skins or 100 pig skins to print the Bible. The printers then began to print everything that they thought was interesting:- Ancient Greek and Roman writings, poetry, plays, lives of the saints, mathematics textbooks, medical textbooks, Christian stories, books about animals and monsters, advice to princes as to how to rule their people and maps of the world.

Before the invention of the printing press, knowledge belonged to priests, monasteries, and universities. Suddenly, many thousands of people, even merchants could learn far more than they ever could before. 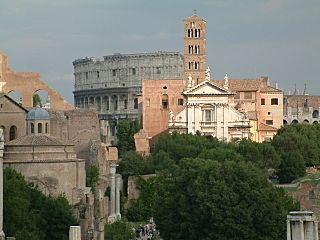 The mixture of architecture in Rome. At the back is the huge wall of the ancient sports arena, the Colosseum. Near it is a church tower from about 1100 in the Middle Ages. The white front of the church of St. Francesca is from the 1600s. The columns and broken walls are all from Ancient Roman buildings. The round building to the left is now a church but was an ancient temple.

The time of Ancient Greece and Rome, when there were many philosophers, writers, painters, sculptors, architects and mathematicians was seen by people as a Golden Age, a time when things were beautiful, well-organised and well-run. This time had lasted from about 400 BC to about 400 AD.

In the year 1400, in the city of Rome, people would wander around looking up at the ruins of a city that had once been great. Inside the broken walls that had been smashed in 410 AD were the remains of huge temples, sports arenas, public baths, apartment blocks and palaces. Nearly all of them were ruined and could not be used. Nearly all of them were half-buried in the dirt. A lot of them were pulled down to use as building stone. But they showed people what great things could be done. Among the ruins of this once-great city, the people of Rome lived in cottages. They still went to church in the huge churches (basilicas) built by the first Christian Emperor, Constantine the Great, in the 4th century. They still held a market day in the Ancient Roman market place of Campo Dei Fiori ("Field of Flowers").

One day in 1402, into the middle of Rome, came a young man called Filippo Brunelleschi and a teenage boy called Donatello. They were fascinated by everything that they saw. They measured ancient ruined buildings, they drew things and they dug around for weeks looking for bits of broken statues and painted pottery that they could stick together. They were probably the world's first archaeologists. By the time they went back home to Florence, they knew more about Ancient Roman architecture and sculpture than anyone had known for about a thousand years. Brunelleschi became a very famous architect and Donatello became a very famous sculptor. 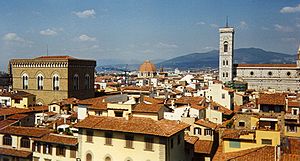 The city of Florence. Apart from the dome at San Lorenzo's in the center of the picture, this view has not changed very much since the 1400s.

The city of Florence is really where the Renaissance began. In those days, Italy was not one single country. It was lots of little states, all governed in different ways and all fighting or making allies with each other all the time.

Rome was politically powerful because Rome had the Pope, the person in control of the Roman Catholic Church. Because of his very great importance as a spiritual leader, most people and most cities did not want to argue with the Pope, whichever Pope he might be. Because a new pope was elected when the old one died, everyone who was rich and powerful was always hoping it might be a member of their family. It was always a good idea to have several young men in the family trained as priests, just in case. It was also a good idea to be good friends with other rich families. One way to do this was to have lots of daughters and get them to marry rich powerful men from different cities. This was the way that politics worked.

The power of Florence was not founded on a strong army, on a strong fortress or a good position to control trade. It was founded on banking. The cleverness in business of one single-family was very important in making Florence powerful and the center of Renaissance learning. The family was called the Medici.

The Birth of Venus' by Sandro Botticelli 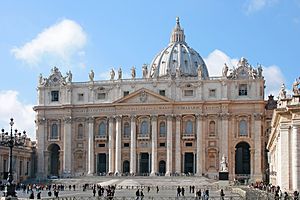 The rebuilding of St. Peter's Basilica began in the Renaissance. 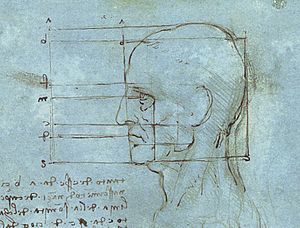 In science and technology 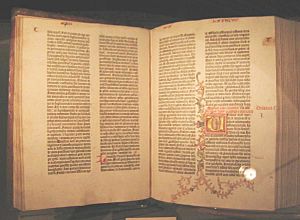 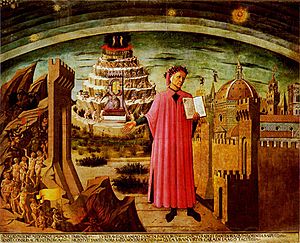 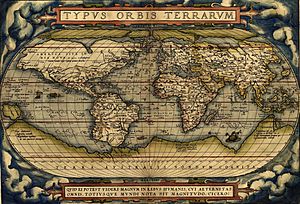 A map of the world by Abraham Ortelius, 1570

All content from Kiddle encyclopedia articles (including the article images and facts) can be freely used under Attribution-ShareAlike license, unless stated otherwise. Cite this article:
Renaissance Facts for Kids. Kiddle Encyclopedia.