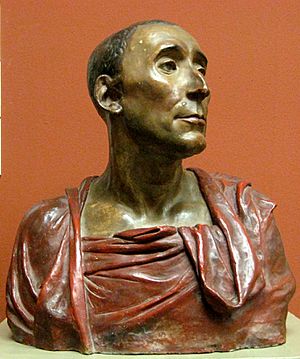 Donatello (Donato di Niccolò di Betto Bardi, c. 1386 – 13 December 1466) was an Italian sculptor during the Renaissance. He lived in Florence. He worked in stone, bronze, wood, clay, and wax with several assistants. His reputation as a great artist was stated by Vasari, and has always stood well. He worked in Rome, Sienna and Padua as well as Florence, and worked for the Church, for Cosimo de' Medici, and for various city authorities.

He was the son of Niccolo di Betto Bardi, and was born in Florence. His mother's name is not known. When Donatello was older, he studied with Filippo Brunelleschi the architect. He also helped the sculptor Lorenzo Ghiberti to make statues for the Battistero di San Giovanni.

Donatello's work was inspired by ancient sculpture. He was the first sculptor of his time to celebrate the human body, an idea that had died out after Greek and Roman times. His life-size statue of David is his best-known work. The David is the first known free-standing nude statue made since antiquity. Much of his work was done for display in grand churches. Between 1415 and 1426, he made five statues for the Florence Cathedral, also known as the Duomo.

Donatello was a realist: an artist whose sculpture showed the subjects as real people. Naturalism and the showing of human feelings are his influences.

All content from Kiddle encyclopedia articles (including the article images and facts) can be freely used under Attribution-ShareAlike license, unless stated otherwise. Cite this article:
Donatello Facts for Kids. Kiddle Encyclopedia.