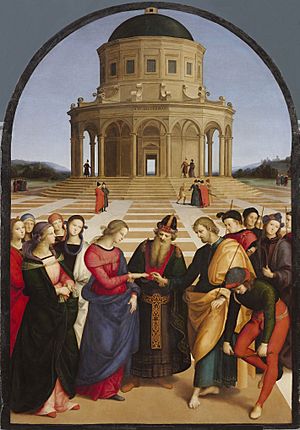 Raphael, The Marriage of the Virgin.

Italian Renaissance art is a style of painting and sculpture that began in the late 13th century (1200s) with the work of the painter Giotto and a sculptor Nicola Pisano. The Renaissance way of painting and sculpting did not become the usual style until about 100 years later. From 1400 to about 1600 many artists in Italy used and developed the style. Leonardo da Vinci is a very famous example of an artist in this style.

Italian Renaissance painting can be divided into four periods:

The Tribute Money for the Brancacci by Masaccio 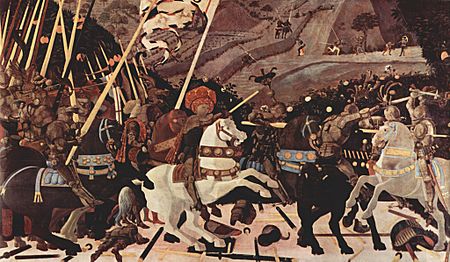 The Battle of San Romano by Paolo Uccello. 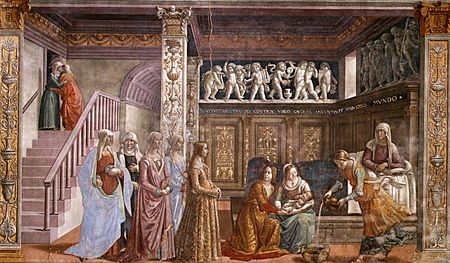 The Birth of the Virgin Mary, by Ghirlandaio.

Cosimo de' Medici was intelligent, deeply religious, very rich, and wanted to be remembered as a man who did great things for Florence. He was a great patron of the arts and learning. He paid artists to make many beautiful paintings and sculptures. He collected many books, that were given to the Friary of St Mark so that a library could be made and many people could use them. After Cosimo, his sons Piero and Giovanni, and his grandsons Lorenzo and Giuliano continued to be patrons of the arts and of learning. They gathered a group of philosophers, poets and artists together in the "Medici Academy".

All content from Kiddle encyclopedia articles (including the article images and facts) can be freely used under Attribution-ShareAlike license, unless stated otherwise. Cite this article:
Italian Renaissance art Facts for Kids. Kiddle Encyclopedia.