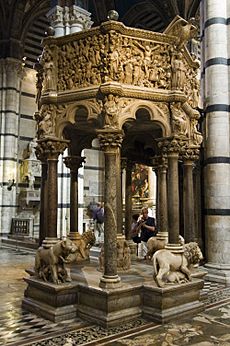 The pulpit of Siena Cathedral

Nicola Pisano (also called Niccolò Pisano and Nicola de Apulia) (c. 1220/1225 – c. 1284) was an Italian sculptor who is best known for the works that he made for Pisa Cathedral. At a time when most artists worked in the Gothic style, Nicola was influenced by the Ancient Roman sculpture that he saw at Pisa, and copied the style into his own work. For this reason Nicola Pisano is sometimes said to be to be the founder of modern sculpture. 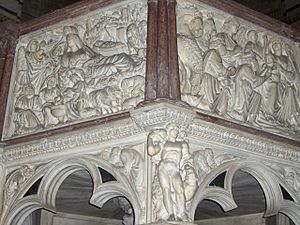 Scenes from the pulpit in the baptistery at Pisa 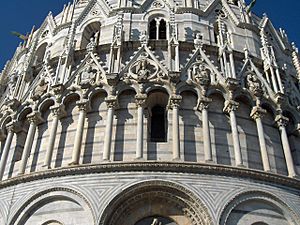 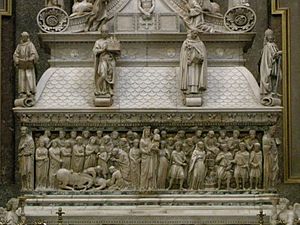 The Arca of St Dominic. The front panels are by Arnolfo di Cambio and the second statue from the left is by Michelangelo

Nicola Pisano's birthdate and exact birthplace are unknown. A document in the archives of Siena Cathedral says that he was the son of Petrus de Apulia. In 1245 Nicola was making sculptures at Prato Cathedral and then moved to Pisa where his son Giovanni Pisano was born.

Around 1255, Nicola received a commission (a paid job) to make the pulpit in the baptistery of Pisa Cathedral. The baptistery was a very large circular domed building that stood near the west doors of the cathedral. Nicola was assisted (helped) by other sculptors including Arnolfo di Cambio who later became a famous architect. The work was finished in 1260 and signed "Nicola Pisanus" which means "Nicholas of Pisa".

The pulpit is hexagonal (six-sided) and is supported on six columns of coloured stone, with another column under the centre of the pulpit. Four of the columns, including the central one, rest on the backs of carved creatures. Around five sides of the pulpit are white marble panels carved with stories from the life of Jesus. They are the Annunciation (telling of Jesus' birth to Mary), the Nativity (birth of Jesus), Angels telling the Shepherds, the Adoration of the Magi (the Three Wise Men), Baby Jesus presented at the Temple, and the Crucifixion.

At Pisa Cathedral was a large cloister (a courtyard surrounded by arches) called the Campo Santo and used as a burial place. All around the arcade in the Campo Santo were Ancient Roman "sarcopgagi" (stone coffins), that had been stolen by the navy of Pisa when they had won a battle. Many of the coffins were richly carved with scenes that told stories. The biographer Giorgio Vasari wrote that Nicola Pisano studied these sculptures before he started work on the carvings for the pulpit. Because of this, Nicola's sculpture makes a bridge between the Gothic style of the 1200s, and the Classical style used by Renaissance artists in the 1400s. The Baptistery of Pisa had been built by an architect called Diotisalvi, but the work was not finished. Nicola Pisano made the dome much higher, and put decoration all around it which 20 years later had sculpture added by Nicola's son Giovanni Pisano.

At Bologna and Siena

In 1264 Nicola Pisano was aksed to work on a grand shrine in memory of St Dominic, called the Arca di San Domenico in the Basilica of San Domenico in Bologna. It is believed that Nicola made the main design but many other sculptors worked on it. More than 200 years later, it was still not finished, and Michelangelo, when he was still a teenager, made three small statues for it.

In September 1265 Nicola began work on another a marble pulpit, even grander than the first, this time for Siena Cathedral. The work took three years, and Nicola was helped by his son Giovanni Pisano and his assistants Arnolfo di Cambio, Lapo di Ricevuto and several other artists.

The pulpit is octagonal in shape and is supported on nine columns, made of granite, porphyry and green marble.. The message of this pulpit is Salvation and the Last Judgment. It has seven sculptured scenes and many small statues. Three of the scenes tell more than one story. All the panels are crowded with figures.

At Pistoia and Perugia

In July 1273 Nicola Pisano was commissioned to make the altar in the Chapel of St James in Pistoia Cathedral. The chapel was demolished and all that remains is a basin for Holy Water, that was possibly made by Nicola.

His last main job, from 1277-78, was to make the sculpture panels to surround a very large fountain in the main square of the city of Perugia. (1277–1278). The fountain was designed by Fra Bevignate and Boninsegna. It is thought that most of the sculpture was done by his son Giovanni Pisano. and his assistants.

All content from Kiddle encyclopedia articles (including the article images and facts) can be freely used under Attribution-ShareAlike license, unless stated otherwise. Cite this article:
Nicola Pisano Facts for Kids. Kiddle Encyclopedia.