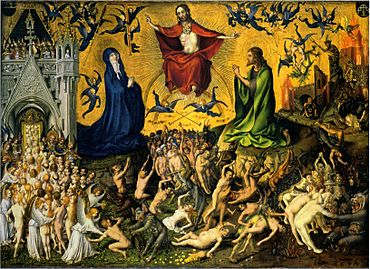 In the Christian religion, The Day of Judgment is the day in the future when all people who are living or who have ever lived will be judged by God. It is often known as the Last Judgment, Final Judgment, Judgment Day, Doomsday, or sometimes it is called The Day of the Lord.

In the Old Testament the prophets had said that one day God would send his son to forgive people for the wrong things they had done and to save their souls. In the early years of the Christian church people thought that, although Jesus Christ had now visited the world and died for us on the cross, salvation will only be completed when the world ends and all people alive or dead will face God who will judge them.

The Day of the Lord is mentioned several times in the Old Testament (e.g. Book of Ezekiel chapter 13 v.5 and Isaiah chapter 2 v.12). In the New Testament the coming of Christ as Judge of the world is mentioned very often. In Paul’s letters and in the Revelation to John, the Christians who are good will reign with Christ for some time in this world. When Christ comes his arrival will be announced by a trumpet call. He will come down from heaven. All the people who are alive will stay alive, and all the people who are dead will become alive again.