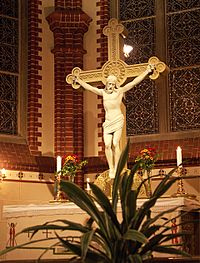 Crucifix inside Eslöv Church, Church of Sweden Diocese of Lund 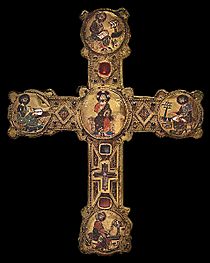 A reliquary in the form of an ornate Christian Cross

History of use of the symbol

The cross-shaped sign, represented in its simplest form by a crossing of two lines at right angles, greatly antedates, in both East and West, the introduction of Christianity. It goes back to a very remote period of human civilization. It is supposed to have been used not just for its ornamental value, but also with religious significance.

During the first two centuries of Christianity, the cross may have been rare in Christian iconography, as it depicts a purposely painful and gruesome method of public execution. The Ichthys, or fish symbol, was used by early Christians. 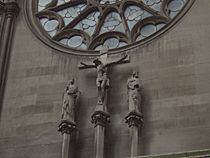 A crucifix on the wall of a church

In Christianity the cross reminds Christians of God's act of love in Christ's sacrifice at Calvary—"the Lamb of God who takes away the sin of the world." The cross also reminds Christians of Jesus' victory over sin and death, since it is believed that through His death and resurrection He conquered death itself. They venerate it not as a material object seen in isolation but as the symbol of the sacrifice by which Christ saved them, as the instrument of Christ's triumph.

Forms of the Cross 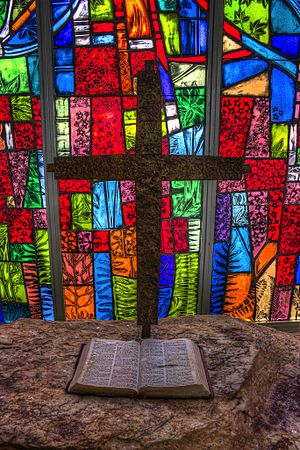 Altar and cross in the Chapel at Callaway Gardens apologetics organization

The cross is often shown in different shapes and sizes, in many different styles. It may be used in personal jewelry, or used on top of church buildings. It is shown both empty and in crucifix form, that is, with a figure of Christ.

Crosses are a prominent feature of Christian cemeteries, either carved on gravestones or as sculpted stelas. Because of this, planting small crosses is sometimes used in countries of Christian culture to mark the site of fatal accidents, or to protest alleged deaths.

In Catholic countries, crosses are often erected on the peaks of prominent mountains, such as the Zugspitze or Mount Royal, so as to be visible over the entire surrounding area.

The empty cross is usually favored by Protestants, and the symbol reminds them of the Resurrection of Jesus. The crucifix is favored by Catholic churches and is a reminder of Christ's sacrifice.

Christians remember the death of Jesus on the cross on Good Friday every year.

All content from Kiddle encyclopedia articles (including the article images and facts) can be freely used under Attribution-ShareAlike license, unless stated otherwise. Cite this article:
Christian cross Facts for Kids. Kiddle Encyclopedia.