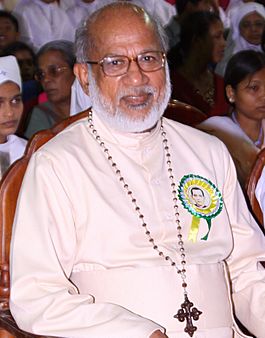 The Syro-Malabar Catholic Church is a Chaldean Rite, Major Archiepiscopal Church in the Roman Catholic Church. It is the largest group among the Saint Thomas Christians. It originates from St. Thomas the Apostle who is believed to have come to India in AD 52. The Syro Malabar Church is the largest St. Thomas Christian community in India. They are also referred to as Syrian Catholics in Kerala. This church has its headquarters in Cochin, Kerala.

Cardinal Mar George Alencherry is the current head of this church.

Syro-Malabar Church has its presence all over the world. However the proper location is in South India. There are 26 Syro-Malabar dioceses world wide.

All content from Kiddle encyclopedia articles (including the article images and facts) can be freely used under Attribution-ShareAlike license, unless stated otherwise. Cite this article:
Syro-Malabar Catholic Church Facts for Kids. Kiddle Encyclopedia.