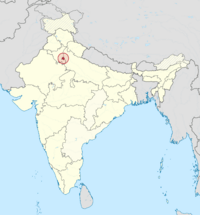 Delhi within the Republic of India 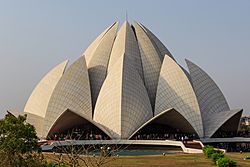 Delhi, officially the National Capital Territory of Delhi (NCT), is a territory in India. It includes the country's capital New Delhi. It covers an area of 573 square miles (1,480 km2). It is bigger than the Faroe Islands but smaller than Guadeloupe. Delhi is a part of the National Capital Region, which has 12.5 million residents. The governance of Delhi is like that of a state in India. It has its own legislature, high court and a council of executive ministers.

Delhi is on the banks of the Yamuna River. Historians have evidence that people have been living in this region since at least the 6th century BC. People also believe that the legendary city of Indraprastha was here. This city has many remains and monuments of historic importance.

The India Gate is a war memorial in Delhi. On the India gate there are names of some of the people who fought for India during 1914 until 1921. 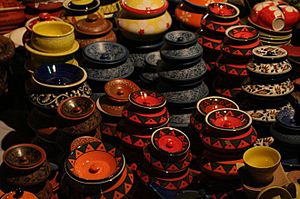 Delhi's culture has been influenced by its lengthy history and historic association as the capital of India, Although a strong Punjabi Influence can be seen in language, Dress and Cuisine brought by the large number of refugees who came following the partition in 1947 the recent migration from other parts of India has made it a melting pot. This is exemplified by many significant monuments in the city. Delhi is also identified as the location of Indraprastha, the ancient capital of the Pandavas. The Archaeological Survey of India recognises 1200 heritage buildings and 175 monuments as national heritage sites. In the Old City, the Mughals and the Turkic rulers constructed several architecturally significant buildings, such as the Jama Masjid – India's largest mosque built in 1656 and the Red Fort. Three World Heritage Sites – the Red Fort, Qutab Minar and Humayun's Tomb – are located in Delhi. Other monuments include the India Gate, the Jantar Mantar – an 18th-century astronomical observatory – and the Purana Qila – a 16th-century fortress. The Laxminarayan temple, Akshardham temple,Bangla Sahib the Bahá'í Lotus temple and the ISKCON temple are examples of modern architecture. Raj Ghat and associated memorials houses memorials of Mahatma Gandhi and other notable personalities. New Delhi houses several government buildings and official residences reminiscent of British colonial architecture, including the Rashtrapati Bhavan, the Secretariat, Rajpath, the Parliament of India and Vijay Chowk. Safdarjung's Tomb is an example of the Mughal gardens style. Some regal havelis (palatial residences) are in the Old City.

Lotus Temple, is a Bahá'í House of Worship completed in 1986. Notable for its flowerlike shape, it serves as the Mother Temple of the Indian subcontinent and has become a prominent attraction in the city. The Lotus Temple has won numerous architectural awards and been featured in hundreds of newspaper and magazine articles. Like all other Bahá'í Houses of Worship, is open to all regardless of religion, or any other distinction, as emphasised in Bahá'í texts. The Bahá'í laws emphasise that the spirit of the House of Worship be that it is a gathering place where people of all religions may worship God without denominational restrictions. The Bahá'í laws also stipulate that only the holy scriptures of the Bahá'í Faith and other religions can be read or chanted inside in any language; while readings and prayers can be set to music by choirs, no musical instruments can be played inside. Furthermore, no sermons can be delivered, and there can be no ritualistic ceremonies practised.

Chandni Chowk, a 17th-century market, is one of the most popular shopping areas in Delhi for jewellery and Zari saris. Delhi's arts and crafts include, Zardozi  – an embroidery done with gold thread – and Meenakari – the art of enamelling.

Rashtrapati Bhavan lit up for Republic Day of India.

Delhi's association and geographic proximity to the capital, New Delhi, has amplified the importance of national events and holidays like Republic Day, Independence Day (15 August) and Gandhi Jayanti. On Independence Day, the Prime Minister addresses the nation from the Red Fort. Most Delhiites celebrate the day by flying kites, which are considered a symbol of freedom. The Republic Day Parade is a large cultural and military parade showcasing India's cultural diversity and military strength. Over the centuries, Delhi has become known for its composite culture, and a festival that symbolises this is the Phool Walon Ki Sair, which takes place in September. Flowers and pankhe – fans embroidered with flowers – are offered to the shrine of 13th century Sufi saint Khwaja Bakhtiyar Kaki and the Yogmaya temple, both situated in Mehrauli. 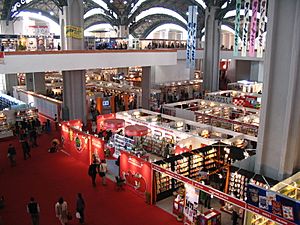 Religious festivals include Diwali (the festival of lights), Mahavir Jayanti, Guru Nanak's Birthday, Raksha Bandhan, Durga Puja, Holi, Lohri, Chauth, Krishna Janmastami, Maha Shivratri, Eid ul-Fitr, Moharram and Buddha Jayanti. The Qutub Festival is a cultural event during which performances of musicians and dancers from all over India are showcased at night, with the Qutub Minar as a backdrop. Other events such as Kite Flying Festival, International Mango Festival and Vasant Panchami (the Spring Festival) are held every year in Delhi. The Auto Expo, Asia's largest auto show, is held in Delhi biennially. The New Delhi World Book Fair, held biennially at the Pragati Maidan, is the second largest exhibition of books in the world. Delhi is often regarded as the "Book Capital" of India because of high readership. India International Trade Fair (IITF), organised by ITPO is the biggest cultural and shopping fair of Delhi which takes place in November each year and is visited by more than 15 lakh people. 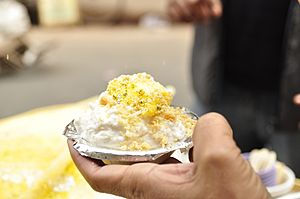 Daulat Chaat is made using a complicated technique of condensing milk foam on a cold night, this dish is only available during winters.

As India's national capital and centuries old Mughal capital, Delhi influenced the food habits of its residents and is where Mughlai cuisine originated. Along with Indian cuisine, a variety of international cuisines are popular among the residents. The dearth of food habits among the city's residents created a unique style of cooking which became popular throughout the world, with dishes such as Kebab, biryani, tandoori. The city's classic dishes include butter chicken, dal makhani, shahi paneer, aloo chaat, chaat, dahi bhalla, kachori, gol gappe, samosa, chole bhature, chole kulche, gulab jamun, jalebi and lassi.

The fast living habits of Delhi's people has motivated the growth of street food outlets. A trend of dining at local dhabas is popular among the residents. High-profile restaurants have gained popularity in recent years, among the popular restaurants are the Karim Hotel, the Punjab Grill and Bukhara. The Gali Paranthe Wali (the street of fried bread) is a street in Chandni Chowk particularly for food eateries since the 1870s. Almost the entire street is occupied by fast food stalls or street vendors. It has nearly become a tradition that almost every prime minister of India has visited the street to eat paratha at least once. Other Indian cuisines are also available in this area even though the street specialises in north Indian food . 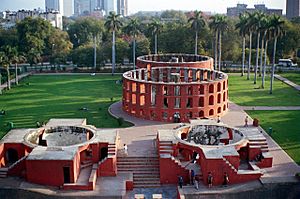 According to Euromonitor International, Delhi ranked as 28th most visited city in the world and first in India by foreign visitors in 2015. There are numerous tourist attractions in Delhi, both historic and modern. The three UNESCO World Heritage Sites in Delhi, Qutb Complex, Red Fort and Humayun's Tomb are among the finest examples of Indo-Islamic architecture. Another prominent landmark of Delhi is India Gate, a 1931 built war memorial to soldiers of British Indian Army who died during First World War. Delhi has several famous places of worship of various religions. One of the largest Hindu temple complexes in the world, Akshardham is a major tourist attraction in the city. Other famous religious sites include Laxminarayan Temple, Gurudwara Bangla Sahib, Lotus Temple, Jama Masjid and ISKCON Temple. Delhi is also a hub for shopping of all kinds. Connaught Place, Chandni Chowk, Khan Market and Dilli Haat are some of the major retail markets in Delhi. Major shopping malls include Select Citywalk, DLF Promenade, DLF Emporio, Metro Walk and Ansal Plaza.

All content from Kiddle encyclopedia articles (including the article images and facts) can be freely used under Attribution-ShareAlike license, unless stated otherwise. Cite this article:
Delhi Facts for Kids. Kiddle Encyclopedia.