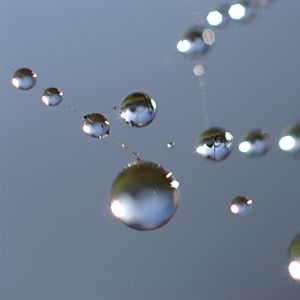 Dew on a spider web.

The dew point is the temperature where water vapor condenses into liquid water.

Condensation of water vapor starts when the temperature of air is lowered to its dew point and beyond. The dew point, like other measures of humidity, can be found from measurement taken by a hygrometer.

All content from Kiddle encyclopedia articles (including the article images and facts) can be freely used under Attribution-ShareAlike license, unless stated otherwise. Cite this article:
Dew point Facts for Kids. Kiddle Encyclopedia.