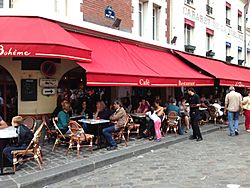 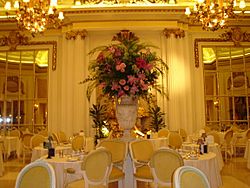 The Palm Court at the Ritz Hotel, London 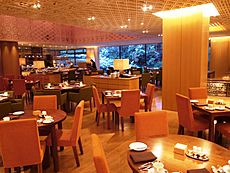 Some restaurants are a chain, meaning that there are restaurants which have the same name and serve the same food. McDonald's, Burger King, and Pizza Hut are examples of chain restaurants that are all over the world. These restaurants serve fast food, that is, inexpensive food, prepared and served quickly. At some, you do not have to even get out of the car to eat. You can pay and get your order from a window. These places are called drive-throughs.

Haute cuisine or 'fine dining' is found in a guide, such as the Michelin Guide, the most famous restaurant guide in the world. Their 3-star rosettes are given only to restaurants with the highest standards of cooking and service. Interestingly, the Guide gives more 3-stars to Tokyo and Kyoto than to Paris, London and New York together. Traditionally, the restaurants of top hotels such as the Hotel de Paris in Monte Carlo or the Hôtel Ritz Paris were the main places recognized for fine dining. Today, most Michelin Guide restaurants are separate establishments. 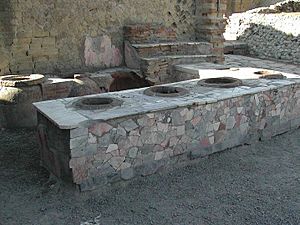 A Roman thermopolium in Pompeii

In Ancient Greece and Rome there were small restaurant-bars offering food and drinks. They were called thermopolia (singular thermopolium). Many dwellings did not have kitchens, and eating out was an important part of socializing.

In Pompeii, 158 thermopolia with service counters have been found. They were along the main road of the town and round the public spaces.

All content from Kiddle encyclopedia articles (including the article images and facts) can be freely used under Attribution-ShareAlike license, unless stated otherwise. Cite this article:
Restaurant Facts for Kids. Kiddle Encyclopedia.