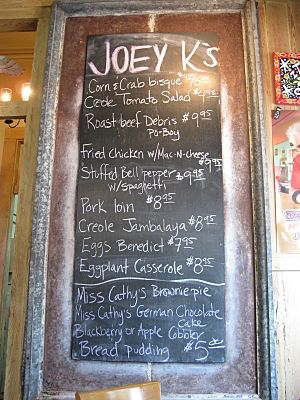 1893 menu for a London club. Because of the influence of French cuisine, many of the dishes have French names.

A menu is a list of dishes to be served at a meal. Menus have been around in Europe since the 18th century. There is a special need for them in Chinese cuisine because of the wide range of dishes on offer. Menus have been discovered from the Song Dynasty in China. In the larger cities of the time, the variety of cuisine from different regions led caterers to create a list for their patrons.

In restaurants, the modern menu, with dishes in a set order of courses, was invented by the great French chef Escoffier. Usually there are two types of menu at a good restaurant:

Lesser establishments might offer a chalkboard, with the advantage that items can be rubbed out or added on at short notice. Fish restaurants in particular depend on daily catches being supplied or bought in the early morning. They usually list fish freshly bought (as opposed to frozen).

In American restaurant management, "menu engineering" has become a branch of marketing.

All content from Kiddle encyclopedia articles (including the article images and facts) can be freely used under Attribution-ShareAlike license, unless stated otherwise. Cite this article:
Menu Facts for Kids. Kiddle Encyclopedia.