In-N-Out Burgers, Inc. is a regional chain of fast food restaurants. The privately held company has 300 locations. These are mostly in the Southwestern United States. In-N-Out encourages customers to customize their orders. They refuse to use Microwave ovens or freezers.

In-N-Out Burger has resisted franchising its operations or going public; one reason is the prospect of quality or customer consistency being compromised by excessively rapid business growth. The company's business practices have been noted for employee-centered personnel policies. For example, In-N-Out is one of the few fast food chains in the United States to pay its employees more than state and federally mandated minimum wage guidelines – starting at US$11.00 per hour in California, as of May 2017. The In-N-Out restaurant chain has developed a highly loyal customer base, and has been rated as one of the top fast food restaurants in several customer satisfaction surveys.

The company was founded by Harry and Esther Snyder in 1948. The current owner is Lynsi Snyder, the Snyders' only grandchild. In 2012 In-N-Out was worth about $800 million USD. 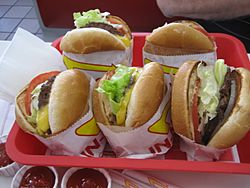 The In-N-Out menu consists of three burger varieties: hamburger, cheeseburger, and "Double-Double" (two hamburger patties and two slices of cheese). French fries and fountain drinks are available, as well as three flavors of milkshakes. The hamburgers come with lettuce, tomato, with or without onions (the customer is asked upon ordering, and may have them fresh or grilled), and a sauce, which is called "spread" (a Thousand Island dressing variant).

There are, however, additional named items not on the menu, but available at every In-N-Out. These variations reside on the chain's "secret menu," though the menu is accessible on the company's web site. These variations include 3x3 (which has three patties and three slices of cheese), 4x4 (four patties and four slices of cheese), Neapolitan shakes, grilled cheese sandwich (consists of the same ingredients as the burgers except the meat, plus two slices of melted cheese).

Protein style (wrap with lettuce; consists of the same ingredients as the burgers except buns), and Animal Style. Both Protein and Animal Style are house specialties that the company has trademarked because of their association with the chain. Animal Style fries come with two slices of melted cheese, spread, and grilled onions on top. Animal style burgers are cooked in a thin layer of mustard, and in addition to the lettuce and tomato it also includes pickles, grilled onions, and extra spread. Whole or sliced chili peppers are also available by request. 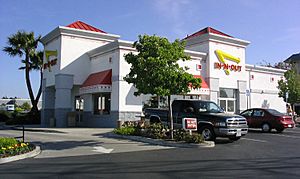 In-N-Out restaurant in Pinole, California near Interstate 80 with one drive-thru lane and an indoor dining area. Note the crossed palm trees in the back

The first In-N-Outs had a common design, placing the kitchen "stand" between two lanes of cars. The "front" lane is nearest the street, and the "back" lane away from the street. A metal awning provides shade for several tables for customers desiring to park and eat, but there is no indoor dining. A walk-up window faces the parking area. These restaurants store food and supplies in a separate building, and it is not uncommon for a driver to be asked to wait a moment while employees carry supplies to the kitchen across the rear lane.

All content from Kiddle encyclopedia articles (including the article images and facts) can be freely used under Attribution-ShareAlike license, unless stated otherwise. Cite this article:
In-N-Out Burger Facts for Kids. Kiddle Encyclopedia.