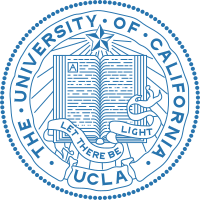 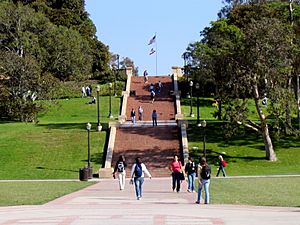 The school was originally a college for teachers, but became a university in 1919, and has been called UCLA since 1927. It was originally in Hollywood, but is now in Westwood. In 1950, it gained independence from the University of California, Berkeley. During the 1960s and 1970s, there were many student protests .

The school has buildings designed by several famous architects, numerous gardens, fountains, and museums. It has academic programs in many fields, including a very famous Film School and medical programs in association with several hospitals.

UCLA has many good sports teams on the Division I level. Their teams, which play in the Pacific-12 Conference, are called the Bruins, or small bears. These teams have won 103 championships. The basketball team plays in Pauley Pavilion and has won 11 championships with players such as Kareem Abdul-Jabbar, Bill Walton and Gail Goodrich. The football team plays in the Rose Bowl stadium, site of the bowl game of the same name. UCLA also has good volleyball and water polo teams, and has sent hundreds of athletes to the Olympic Games. UCLA has a strong rivalry with USC, the other university in Los Angeles, in all sports. There are lesser rivalries with Stanford, Cal and Notre Dame.

All content from Kiddle encyclopedia articles (including the article images and facts) can be freely used under Attribution-ShareAlike license, unless stated otherwise. Cite this article:
University of California, Los Angeles Facts for Kids. Kiddle Encyclopedia.