James Edward Franco (born April 19, 1978) is an American actor, filmmaker, and college instructor. Franco is known for his roles in live-action films and televison. He is known for his collaborations with fellow actor Seth Rogen, having appeared in eight films and one television series with him. Franco volunteers for the Art of Elysium charity, and has also taught film classes at New York University, the University of Southern California, UCLA, Studio 4, and Palo Alto High School.

James Edward Franco was born in Palo Alto, California. His mother is a writer and occasional actress, and his father ran a Silicon Valley business. He grew up in California with his two brothers, actors Tom and Dave. A "math whiz", Franco interned at Lockheed Martin. He graduated from Palo Alto High School in 1996, where he acted in plays.

Although the idea of becoming a marine zoologist interested him, Franco had always secretly wanted to become an actor but feared being rejected. He enrolled at the University of California, Los Angeles (UCLA) as an English major, but dropped out after his first year to pursue a career as an actor. He chose to take acting lessons with Robert Carnegie at the Playhouse West. Around this time, he took up a late-night job at McDonald's to support himself. 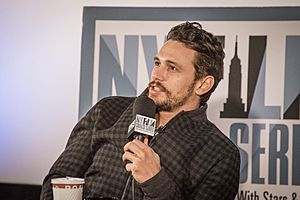 After 15 months of training, he began auditioning in Los Angeles. His first paid role was a television commercial for Pizza Hut. He found guest roles on television shows but his first break came in 1999 when he was cast as the title role in the 2001 TV biographical film James Dean. To immerse himself in the role, Franco went from being a non-smoker to smoking two packs of cigarettes a day, bleached his dark brown hair blond, and learned to ride a motorcycle as well as play guitar and the bongos. To have a greater understanding of Dean, Franco spent hours with two of Dean's associates. He received a Golden Globe Award and nominations for an Emmy Award and a Screen Actors Guild Award (SAG).

Franco achieved worldwide fame and attention in the 2002 superhero film Spider-Man, when he played Harry Osborn, the son of the villainous Green Goblin (Willem Dafoe) and best friend of Spider-Man (Tobey Maguire).

He has acted and directed many movies and television shows since he first began his career, at the end of 2017 Franco almost 40, said he was slowing down to focus on himself.

All content from Kiddle encyclopedia articles (including the article images and facts) can be freely used under Attribution-ShareAlike license, unless stated otherwise. Cite this article:
James Franco Facts for Kids. Kiddle Encyclopedia.