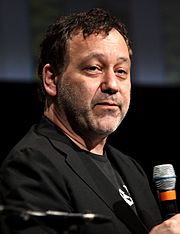 Raimi was born on October 23, 1959 in Royal Oak, Michigan to a Hungarian-Russian Jewish family. He was raised in Birmingham, Michigan. He studied at Groves High School and at Michigan State University. Raimi has been married to Gillian Dania Greene since 1993. They have five children.

All content from Kiddle encyclopedia articles (including the article images and facts) can be freely used under Attribution-ShareAlike license, unless stated otherwise. Cite this article:
Sam Raimi Facts for Kids. Kiddle Encyclopedia.