The city is located along the Woodward Corridor, and Interstate 75 and Interstate 696 also pass through Royal Oak. As a northern suburb of Metro Detroit, the city is about 3 miles (4.8 km) north of the city of Detroit. Portions of the Detroit Zoo are within Royal Oak, extending into neighboring Huntington Woods. 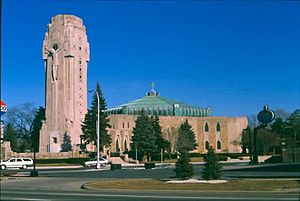 Shrine of the Little Flower

Royal Oak was incorporated as a village, in 1891, and as a city in 1921. The name originated in 1819, during one of Territorial Governor Lewis Cass' surveying expeditions. A large oak tree located near the present-day intersection of Crooks, Rochester, and Main reminded Cass of the Royal Oak which King Charles II of England hid in to escape capture by the Roundheads after the Battle of Worcester.

In the 1920s, Father Charles Coughlin became the founding pastor of the Shrine of the Little Flower, a prominent landmark in the city. Through his ministry, he raised funds to build the present limestone Church complex and tower from which he aired his radio show.

Throughout the late 1990s and early 2000s, Royal Oak's downtown grew into an entertainment and nightlife destination. A number of large condominiums and lofts have been built in the area. The city also has a Farmers Market located at the corner of 11 Mile Road and Troy Street, adjacent to the 44th District Court. The Royal Oak Farmers Market opened as a truck market, at the corner of 4th and Troy streets, on October 14, 1925 as a cooperative venture between the then-new City of Royal Oak and Oakland County, Michigan. The present structure was erected in the spring of 1927 and dedicated July 1 of that year. 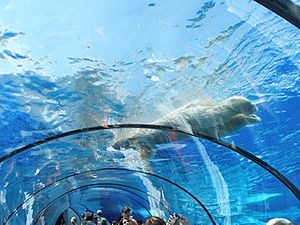 Downtown Royal Oak features a wide assortment of nightlife venues, including the Royal Oak Music Theatre and the Landmark Main Art Theatre. Royal Oak is home to the Detroit Zoo, one of the region's leading tourist attractions. Mark Ridley's Comedy Castle, a comedy club, was an early venue for performers such as Tim Allen and Dave Coulier. The many restaurants range in fare from take-out sandwiches to high-end establishments specializing in cuisines like Italian, Belgian, Nepali, and others. Pubs include biker bars, dance clubs, upscale breweries, sports bars, and rooftop bars. During the summer, downtown Royal Oak becomes host to hordes of motorcycle enthusiasts from around Metro Detroit. On Wednesday nights Main Street is often lined with Harley-Davidsons, whereas on Thursday night the streets fill up with sport bikes.

Royal Oak encompasses a major span of the Woodward Dream Cruise. The city sponsors ancillary events around the Cruise.

In December 2009 it was announced that the Arts, Beats and Eats festival would be moved from Pontiac to Royal Oak.

In addition to The Detroit News and Detroit Free Press, regional newspapers serving all of southeast Michigan, the city is served by the Daily Tribune, The Oakland Press, the Royal Oak Review, and The Mirror.

Royal Oak is also the setting for the popular Nickelodeon show, The Loud House. However, the town goes by the fictional name of "Royal Woods".

Royal Oak once had a river, the Red Run. Vinsetta Boulevard was built skirting a source branch of the Red Run for its median, but in the 1930s, Vinsetta's entire median, along with the river and all but the top of the bridges for the crossing streets were filled in as part of a WPA project. During 1967–8, the rest of the river in Oakland County was buried in a six-foot drain pipe. 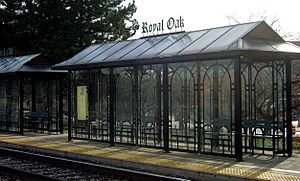 Royal Oak developed initially as a suburb after Detroit boomed as a major industrial city. The predominantly white residents of Detroit began to move to the suburbs for newer housing, and to separate themselves from a burgeoning African American population, in a process referred to as white flight. It had a compact, traditional street-side shopping district, which runs along Main Street and Washington Avenue downtown. During the 2000s, this area was redeveloped with numerous new businesses, and is now considered a trendy, upscale, urban-chic district, featuring restaurants, shopping, and entertainment. A number of mixed-use high-rise developments have been constructed — mostly condo "lofts" with retail and office space on the lower levels.

The National Arbor Day Foundation has awarded Royal Oak the distinction of "Tree City USA" every year since 1976 as a result of the city's commitment to tree planting and preservation.

The Gilda Radner Hereditary Cancer Program is a foundation set up by Detroit-area native Gilda Radner, who is known for her work as a comedian of Saturday Night Live. In 1998 the Program created a free cancer support community for people with cancer, their families, and friends. Gilda's Club Metro Detroit operates a three-story non-residential house in Royal Oak. It has served more than 3,000 members for social and emotional support through a variety of activities.

The city is served by Royal Oak Neighborhood Schools. There is also a private high school, Shrine Catholic. A branch of Oakland Community College is located in the city.

A portion of land in the city is zoned to Berkley Public Schools.

In recent years Royal Oak has begun to consolidate its public schools in response to a decline in enrollment levels compared to the baby boom era. In 2006, the city's two public high schools, George A. Dondero High School and Clarence M. Kimball High School, were combined into a new Royal Oak High School. Beginning in 2007, the city's two middle schools were combined into one school, Royal Oak Middle School, in the former Dondero building. The number of elementary schools was reduced to six. Some parents protested the planned closure and demolition of Longfellow and Whittier elementary schools. They were seeking to have them considered for historic district recognition by way of signed petition. Despite their efforts, both schools and a number of other former elementary schools were demolished in the fall of 2007.

The Royal Oak school system gained brief notoriety for an incident following the Trump election. Some middle schoolers chanted "build that wall". A student video of the incident was widely shared on Facebook, attracting more than 4 million views within 24 hours. A week later a noose was found in the 8th grade boys bathroom at the middle school. The student who had placed the noose in the bathroom was removed from the school shortly afterward.

St. Dennis School of the Roman Catholic Archdiocese of Detroit was formerly in Royal Oak. It closed in 2011.

All content from Kiddle encyclopedia articles (including the article images and facts) can be freely used under Attribution-ShareAlike license, unless stated otherwise. Cite this article:
Royal Oak, Michigan Facts for Kids. Kiddle Encyclopedia.