Oakland County is a county in the U.S. state of Michigan, northwest of the Detroit metropolitan area. As of the 2010 census, its population was 1,202,362, making it the second-most populous county in Michigan, behind neighboring Wayne County. The county seat is Pontiac. The county was founded in 1819 and organized in 1820.

Oakland County is composed of 61 cities, townships and villages, and is part of the Detroit-Warren-Dearborn, MI Metropolitan Statistical Area. The city of Detroit is in neighboring Wayne County, south of 8 Mile Road. Oakland County is among the ten highest income counties in the United States with populations over one million people. It is also home to Oakland University, a large public institution that straddles the Auburn Hills and Rochester Hills border.

The county's knowledge-based economic initiative, coined "Automation Alley", has developed one of the largest employment centers for engineering and related occupations in the United States. But Oakland County has shared in the recent economic hardships brought on by troubles at General Motors, Ford, and Chrysler. It has fared better than Detroit and Flint, as its economy is more diverse and less reliant on manufacturing jobs. All three automotive companies are major employers within southeast Michigan and have a significant presence within Oakland County.

Founded by Territorial Governor Lewis Cass in 1819, sparsely settled Oakland was originally twice its current size. As was customary at the time, as populations increased, other counties were organized from its land area. Woodward Avenue and the Detroit and Pontiac Railroad helped draw settlers in the 1840s. By 1840, Oakland had more than fifty lumber mills, processing wood harvested from the region and the Upper Peninsula. Pontiac, located on the Clinton River, was Oakland's first town and became the county seat. After the Civil War, Oakland was still primarily a rural, agricultural county with numerous isolated villages. By the end of the 19th century, three rail lines served Pontiac, and the city attracted carriage and wagon factories. In the late 1890s streetcars were constructed here and to Detroit.

At that time, developers made southern Oakland County a suburb of Detroit; a Cincinnati firm platted a section of Royal Oak called "Urbanrest." Migration worked both ways. Several thousand people moved from Oakland County farms to Detroit as the city attracted factories. By 1910, a number of rich Detroiters had summer homes and some year-round residences in what became Bloomfield Hills. The auto age enveloped Pontiac in the early 1900s. The Oakland Motor Car Company was founded in 1907 and became a part of General Motors Corp., which was soon Pontiac's dominant firm.

In the 1950s, the Detroit metropolitan population began migrating to the suburbs, aided by the GI Bill for veterans and federal subsidies for highways and freeways. Oakland County is among the ten highest-income counties in the United States with more than one million population. The median price of a home in Oakland County increased to $164,697, more than $30,000 above the national median. Oakland County is home to popular super-regional shopping malls such as Somerset Collection, Twelve Oaks Mall, and Great Lakes Crossing Outlets.

Oakland County was originally divided into 25 separate townships, which are listed below. Each township is roughly equal in size at six miles (10 km) by six miles, for a total township area of 36 square miles (93 km2). The roots of this design were born out of the Land Ordinance of 1785 and the subsequent Northwest Ordinance of 1787. Oakland County itself is a prime example of the land policy that was established, as all townships are equal in size (save for slight variations due to waterways). Section 16 in each township was reserved for financing and maintaining public education, and even today many schools in Oakland County townships are located within that section.

Wayne County, where the city of Detroit is located, borders Oakland County to the south. 8 Mile Road, also known as "Baseline Road" in some areas, is the boundary between these counties. The baseline was used during the original surveying for Michigan, and it serves as the northern/southern boundaries for counties from Lake St. Clair to Lake Michigan. As more working and middle-class populations moved to the suburbs from the 1950s on, this divide (8 Mile Road) became historically known as an unofficial racial dividing line between what became the predominantly black city and almost exclusively white suburbs.

There are Krogers in Oakland County.

The Jewish community of metropolitan Detroit, with a population of 72,000, is the 21st largest Jewish community in the nation. This community is concentrated in Oakland County, especially in West Bloomfield, Bloomfield Hills, Farmington Hills, Troy and Huntington Woods.

The following airports are located in neighboring counties:

The conditions on most non-residential roads in Oakland County are not favorable to bicycling. Exceptions to this are primarily in the inner-ring suburbs within the southeast corner of the county. This is due to their street grid.

A primary reason for these unfavorable cycling conditions is the Road Commission for Oakland County has a policy of not accommodating bicycles on the road. As a result, some communities have designated sidepaths (locally called "safety paths") as bike routes which do not meet the American Association of State Highway and Transportation Officials (AASHTO) guidelines for bicycling facilities and have been found to be less safe than on-road bike facilities.

As a result, there are no designated Bicycle Friendly Communities within Oakland County.

Only the city of Ferndale has a built comprehensive bicycle network of bike lanes and signed shared roadways. 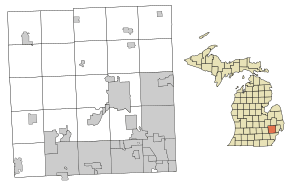 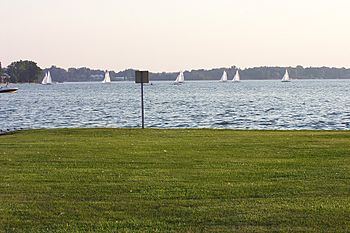 Cass Lake, the largest and deepest lake in Oakland County

There are 387 lakes in Oakland County. Of those lakes, 317 are named while 70 are unnamed lakes.

Dark Lake (Independence Twp.) - two lakes with this name in this location

There are no lakes in Oakland County beginning with the letter X, Y or Z.

The ten largest lakes in Oakland County are:

The ten deepest lakes in Oakland County are:

There are five rivers in Oakland County:

The headwaters of each of these rivers lie in Oakland County.

All content from Kiddle encyclopedia articles (including the article images and facts) can be freely used under Attribution-ShareAlike license, unless stated otherwise. Cite this article:
Oakland County, Michigan Facts for Kids. Kiddle Encyclopedia.