Oxford is a village in Oakland County in the U.S. state of Michigan. It is located among metropolitan Detroit's affluent northern suburbs. The population was 3,436 at the 2010 census. The village is entirely within Oxford Charter Township. The village occupies one square mile and is both politically and geographically a part of the township. The village calls itself sister city to Oxford, England. Oxford is located roughly 30 miles (48 km) from Flint and 40 miles (64 km) from Detroit. 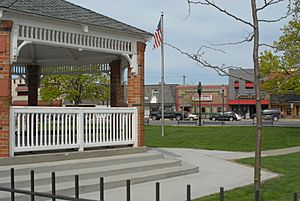 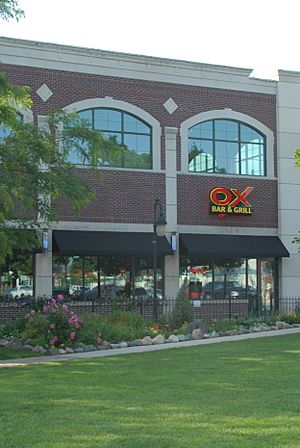 The Ox Bar and Grill next to Centennial Park

The village center consists of shops, restaurants, and taverns stretching for two blocks. Local happenings such as athletic events, downtown fairs, scarecrow competitions, school plays, the annual Steamback golf outing at Oxford Hills and concerts garner a large turnout throughout the year and are reported in the weekly newspaper of record since 1898, The Oxford Leader.

The area's public high school, Oxford High School, was newly expanded in 2003-2004 and now holds the title of the largest single-floor high school in the state of Michigan. 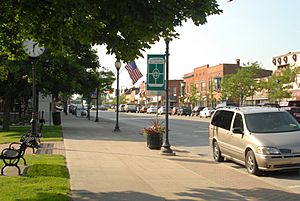 Washington Street on a summer day

There were 1,335 households of which 33.0% had children under the age of 18 living with them, 51.5% were married couples living together, 10.6% had a female householder with no husband present, 4.6% had a male householder with no wife present, and 33.4% were non-families. 29.1% of all households were made up of individuals and 6.6% had someone living alone who was 65 years of age or older. The average household size was 2.49 and the average family size was 3.09.

There were 1,402 households out of which 35.6% had children under the age of 18 living with them, 53.4% were married couples living together, 9.4% had a female householder with no husband present, and 34.5% were non-families. 29.6% of all households were made up of individuals and 7.2% had someone living alone who was 65 years of age or older. The average household size was 2.51 and the average family size was 3.15.

During the early 19th century the northeast Oakland County area was largely avoided by the early settlers because it was believed to be nothing but impenetrable swamp land. The area was, at that time, nicknamed "The Barren Plains of Oxford." It was called this primarily because of a report made in 1812 by the U.S. Surveyor General that described the area as a poor, barren, sandy land, on which scarcely any vegetation could grow with the exception of some very small scrubby oaks. It was concluded in the surveyors' report that there was one acre out of one hundred that appeared to be eligible for cultivation. Any hope for crop production was thought to be preposterous. At this point, the area was deemed worthless, and discouragement of any hope for development by forthcoming settlers was inevitable. 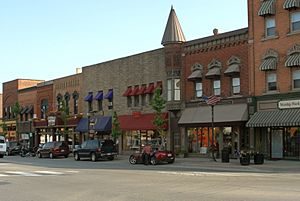 West side of Washington Street

Purchase of public land in what is now called Oxford was in 1823 by a man named Elbridge G. Deming. Soon after, the first person to settle in Oxford was a wolf trapper named Avery Brown. He made use of the land and gave some credibility to its value. It wasn't long after that the first area post office was officially established in what was then known as Demingsburgh on May 2, 1834. Five years later, the name was officially changed to Oxford on January 15, 1839. Elbridge D. Deming was the first postmaster for Oxford, as the post office was located in his log home near the intersection of M-24 and Metamora Road. At that time, the mail was brought from Rochester once a week by a man named Mr. Hubbard who walked the distance to ensure, what was at that time, considered as prompt delivery of the mail. A few years later the delivery time was drastically cut by another man named Mr. Rose. The route was given to him as he would use his horse and cart instead of walking like his predecessor, thus expediting the delivery time tenfold.

All content from Kiddle encyclopedia articles (including the article images and facts) can be freely used under Attribution-ShareAlike license, unless stated otherwise. Cite this article:
Oxford, Michigan Facts for Kids. Kiddle Encyclopedia.