Kids Encyclopedia Facts
This page is about an acting performance done at a theatre. For the activity, see Play (activity). For other uses, see Play. 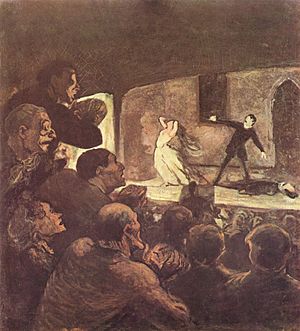 Painting of a play being performed

A play is a piece of writing (literature) which can be seen at a theatre or on television, or heard on the radio. Plays often show conversations between people. A play is usually watched, rather than being read.

The people who appear in a play are actors; in a theatre they stand on a stage so the people watching (the audience) can see them better. A director helps the actors to work better, or tells them how he wants the play to be.

Plays can be very interesting because they can be understood in many different ways. When the writer - the playwright - makes the play, he can not say how the actors or director will use it. Sometimes the playwright is also the director or an actor: Molière, for example, was often an actor in his plays. But the director can change the play in different ways: the actors' costume, the music, how people say things, how they move or what they hold. Modern directors can direct plays by Shakespeare, and these old plays seem modern now, too.

There are many sorts of plays, but there are six important sorts:

Symbolic can also be called expressionistic. Its all about how the writer or director presents ideas in a very different point of view.

All content from Kiddle encyclopedia articles (including the article images and facts) can be freely used under Attribution-ShareAlike license, unless stated otherwise. Cite this article:
Play (theatre) Facts for Kids. Kiddle Encyclopedia.