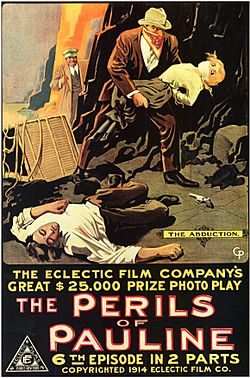 Poster for The Perils of Pauline (1914) a melodramatic film series

A melodrama is a dramatic or literary work where the plot is sensational. It appeals strongly to the emotions. It has crude characterization. Characters are simply-drawn, and stereotyped.

Melodrama is a portmanteau word, formed by combining the words "melody" from the Greek "melōidía", meaning "song") and "drama". Originally it referred to the use of music in a play.

A melodrama is often a play with characters like: a villain, hero, heroine, policeman, damsel in distress and an elderly person (which usually ends happily). Melodramas were popular in the Victorian era on the stage and in novels.

All content from Kiddle encyclopedia articles (including the article images and facts) can be freely used under Attribution-ShareAlike license, unless stated otherwise. Cite this article:
Melodrama Facts for Kids. Kiddle Encyclopedia.