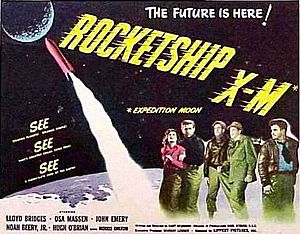 Space opera is adventure science fiction in outer space or on distant planets. Action is more important than the science or characters. There is usually a strong hero and a very big conflict. The action often moves to many different places. The best-selling science fiction book of all time is a space opera. It is Dune by Frank Herbert.

Some people have a negative opinion of Space opera. They use the name as an snsult. They do not like these stories because they have several problems. The action may be impossible to believe. The science may be silly. The characters may be simple and boring.

But, other people have a feeling of nostalgia for space opera. They think these stories from the golden age of science fiction have a special feeling of wonder and excitement. Edward E. (Doc) Smith may be the first important writer of this type of SF. He wrote two series called Skylark and Lensman. These are important early examples of space opera novels. Flash Gordon is an early example of this genre from radio, TV, and film.

All content from Kiddle encyclopedia articles (including the article images and facts) can be freely used under Attribution-ShareAlike license, unless stated otherwise. Cite this article:
Space opera Facts for Kids. Kiddle Encyclopedia.