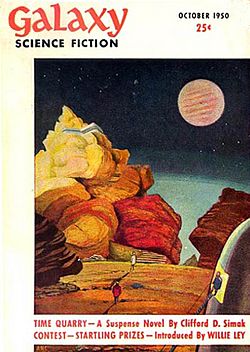 David Stone's cover for the first issue of Galaxy

Galaxy Science Fiction was an American science fiction magazine. It was published from 1950 to 1980.

H. L. Gold was the first editor. He made Galaxy the leading science fiction magazine of its time. He published stories about social issues, not just technology. Gold published many well-known and important stories, including: Robert A. Heinlein's The Puppet Masters and Alfred Bester's The Demolished Man. He also published Ray Bradbury's "The Fireman", which later became the novel Fahrenheit 451.

By the late 1950s, Frederik Pohl was helping Gold with the magazine. When Gold became ill, Pohl became editor. He started officially at the end of 1961, but had been doing most of the editing for a while. Galaxy continued to be successful. Pohl often published fiction by important writers such as Cordwainer Smith, Jack Vance, Harlan Ellison, and Robert Silverberg. However, Pohl never won the annual Hugo Award for his work at Galaxy. He did win three Hugos for another magazine, If. In 1969, Galaxy was sold to Universal Publishing and Distribution Corporation (UPD) and Pohl quit. Later editors included Ejler Jakobsson and James Baen.

All content from Kiddle encyclopedia articles (including the article images and facts) can be freely used under Attribution-ShareAlike license, unless stated otherwise. Cite this article:
Galaxy Science Fiction Facts for Kids. Kiddle Encyclopedia.