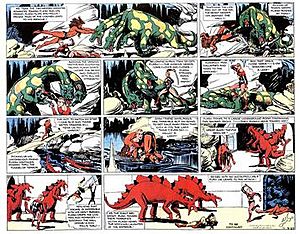 Flash Gordon is a science fiction adventure story that began as a comic strip in 1934. Since then, the Flash Gordon story has been made into movies, TV shows and a radio show.

In the story, Flash Gordon and Dale Arden blast off into space in a rocket invented by the strange Dr. Hans Zarkov. They travel to the planet Mongo, where the evil Emperor Ming plans to take over the Earth. Flash, Dale and Zarkov have to make friends with the other people on Mongo, to battle Ming and stop his plans.

All content from Kiddle encyclopedia articles (including the article images and facts) can be freely used under Attribution-ShareAlike license, unless stated otherwise. Cite this article:
Flash Gordon Facts for Kids. Kiddle Encyclopedia.