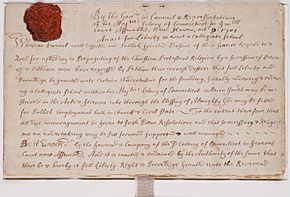 Yale University is a private university in New Haven, Connecticut. It is in the Ivy League and considered by many people to be one of the best universities in the world. Yale is the third oldest university in the United States.

Yale was founded in 1701 in a town near New Haven by a group of church ministers. At first it was called "The Collegiate School" and was created to teach male church ministers in Connecticut. When Elihu Yale, a businessman with the East India Company, gave the school money and books in 1718, the school changed its name to Yale College. It moved into the center of New Haven in the same year. About fifty years later, the school began to teach other subjects like science and history. As the school became more liberal, it became one of the first American schools where extracurricular student groups were created, especially singing groups, sports teams, and student publications like the Yale Daily News.

In the beginning, Yale only taught undergraduate students. Over time, it created graduate schools for medicine, nursing, environmental science, law, music, drama, business, and other professions. In 1869, Yale became the first school in the United States to offer a PhD. Because it had grown to have many types of schools, degrees, and courses, Yale changed its name to Yale University in 1887. The undergraduate college began to accept women as students in 1969.

Yale has one of the largest libraries in the United States, with 19 library buildings and over 15 million books. The school's main library building, Sterling Memorial Library, is built to look like a cathedral. The Beinecke Library has one of the world's largest collections of rare books and old manuscripts.

The school's campus is known for its Gothic Revival architecture, which was built to look like older English universities like Oxford and Cambridge. On its main campus, Yale has two art museums, a natural history museum, and many theaters. The university also has a golf course near campus and owns five forests in New England.

Yale's color is blue, and its mascot is a bulldog named "Handsome Dan." Its sports teams are called the Yale Bulldogs, and they play in the Ivy League.

Peter Salovey, a psychologist, is the current president of Yale.

All content from Kiddle encyclopedia articles (including the article images and facts) can be freely used under Attribution-ShareAlike license, unless stated otherwise. Cite this article:
Yale University Facts for Kids. Kiddle Encyclopedia.