Kids Encyclopedia Facts
This page is about the family of Cornelius Vanderbilt. For other uses, see Vanderbilt (disambiguation).

The Vanderbilt family is an American family of Dutch origin who gained prominence during the Gilded Age. Their success began with the shipping and railroad empires of Cornelius Vanderbilt, and the family expanded into various other areas of industry and philanthropy. Cornelius Vanderbilt's descendants went on to build grand mansions on Fifth Avenue in New York City; luxurious "summer cottages" in Newport, Rhode Island; the palatial Biltmore House in Asheville, North Carolina; and various other opulent homes. 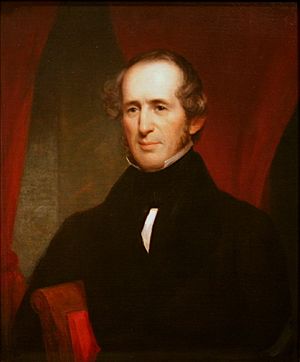 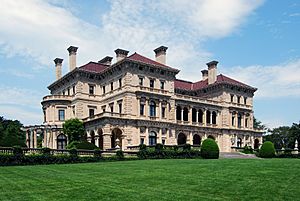 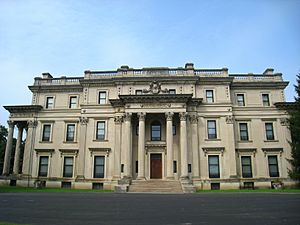 The progenitor of the Vanderbilt family was Jan Aertszoon or Aertson (1620–1705), a Dutch farmer from the village of De Bilt in Utrecht, Netherlands, who emigrated to the Dutch colony of New Netherland as an indentured servant to the Van Kouwenhoven family in 1650. The name of Jan's village, in the genitive case, was added to the Dutch "van" ("from") to create "Van der Bilt", which evolved into "Vanderbilt" when the English took control of New Amsterdam (now Manhattan). The family is associated with the Dutch patrician Van der Bilt.

His great-great-great-grandson Cornelius Vanderbilt began the prominence of the family, the fourth of nine children born to a Staten Island family of modest means. Through his paternal great-great grandmother Abigail Southard, he descends from Republic of Salé President Jan Janszoon and his son Anthony Janszoon van Salee. They were among the earliest arrivals to 17th-century New Amsterdam. In a number of documents dating back to this period, Anthony is described as tawny or mulatto, as his mother was of Berber origin from Cartagena in the Kingdom of Murcia. Cornelius Vanderbilt left school at age 11 and went on to build a shipping and railroad empire that, during the 19th century, would make him one of the wealthiest men in the world. Starting with a single boat, he grew his fleet until he was competing with Robert Fulton for dominance of the New York waterways, his energy and eagerness earning him the nickname "Commodore", a United States Navy title for a captain of a small task force. Fulton's company had established a monopoly on trade in and out of New York Harbor. Vanderbilt, based in New Jersey at the time, flouted the law, steaming in and out of the harbor under a flag that read, "New Jersey Must Be Free!" He also hired the attorney Daniel Webster to argue his case before the United States Supreme Court; Vanderbilt won, thereby establishing an early precedent for America's first laws of interstate commerce.

The Vanderbilt family lived on Staten Island until the mid-1800s, when the Commodore built a house on Washington Place (in what is now Greenwich Village). Although he always occupied a relatively modest home, members of his family would use their wealth to build magnificent mansions. Shortly before his death in 1877, Vanderbilt donated US$1 million for the establishment of Vanderbilt University in Nashville.

Cornelius II's brother, William Kissam Vanderbilt, also featured prominently in the family's affairs. He also built a home on Fifth Avenue and would become one of the great architectural patrons of the Gilded Age, hiring the architects for (the third, and surviving) Grand Central Terminal. He also built Marble House at 596 Bellevue Avenue in Newport, Rhode Island.

While some of Cornelius Vanderbilt's descendants gained fame in business, others achieved prominence in other ways, e.g.:

Members (by year of birth)

All content from Kiddle encyclopedia articles (including the article images and facts) can be freely used under Attribution-ShareAlike license, unless stated otherwise. Cite this article:
Vanderbilt family Facts for Kids. Kiddle Encyclopedia.