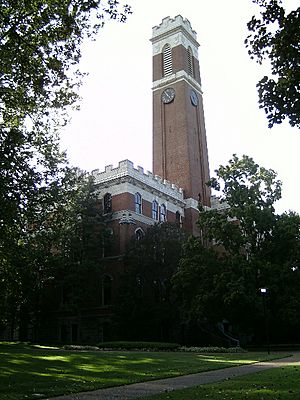 Vanderbilt University is a private university in Nashville, Tennessee. The university has about 12,714 students. It was founded in 1873. The current chairman of the university, whose official title is "Chancellor", is Nicholas Zeppos. It is named after Cornelius Vanderbilt.

The athletics teams of the university are called the Commodores. They have 16 varsity teams, almost all of which compete in the Southeastern Conference (SEC). Two Vanderbilt women's teams in sports that the SEC does not sponsor are housed elsewhere. The bowling team plays in the Southland Bowling League, a single-sport conference affiliated with the Southland Conference. The lacrosse team plays in the American Athletic Conference.

All content from Kiddle encyclopedia articles (including the article images and facts) can be freely used under Attribution-ShareAlike license, unless stated otherwise. Cite this article:
Vanderbilt University Facts for Kids. Kiddle Encyclopedia.