Cornelius Vanderbilt (May 27, 1794 – January 4, 1877), also known informally as "Commodore Vanderbilt", was an American business magnate and philanthropist who built his wealth in railroads and shipping. Born poor and having but a mediocre education, he used perseverance, intelligence and luck to work into leadership positions in the inland water trade, and invest in the rapidly growing railroad industry. He is best known for building the New York Central Railroad.

As one of the richest Americans in history and wealthiest figures overall, Vanderbilt was the patriarch of a wealthy, influential family. He provided the initial gift to found Vanderbilt University in Nashville, Tennessee.

Cornelius Vanderbilt's great-great-grandfather, Jan Aertson or Aertszoon ("Aert's son"), was a Dutch farmer from the village of De Bilt in Utrecht, Netherlands, who emigrated to New York as an indentured servant in 1650. The Dutch van der ("of the") was eventually added to Aertson's village name to create "van der Bilt" ("of De Bilt"). This was eventually condensed to Vanderbilt.

Cornelius Vanderbilt was born in Staten Island, New York, to Cornelius van Derbilt and Phebe Hand. He began working on his father's ferry in New York Harbor as a boy, quitting school at the age of 11. At the age of 16, Vanderbilt decided to start his own ferry service. He began his business by ferrying freight and passengers between Staten Island and Manhattan. Such was his energy and eagerness in his trade that other captains nearby took to calling him The Commodore in jest - a nickname that stuck with him all his life.

Some of the first railroads in the United States were built from Boston to Long Island Sound, to connect with steamboats that ran to New York. By the end of the decade, Vanderbilt dominated the steamboat business on the Sound, and began to take over management of the connecting railroads. In the 1840s, he launched a campaign to take over the most attractive of these lines, the New York, Providence and Boston Railroad, popularly known as the Stonington. By cutting fares on competing lines, Vanderbilt drove down the Stonington stock price, and took over the presidency of the company in 1847. It was the first of the many railroads he would head.

During these years, Vanderbilt also operated many other businesses. He bought large amounts of real estate in Manhattan and Staten Island, and took over the Staten Island Ferry in 1838.

When the Civil War began in 1861, Vanderbilt attempted to donate his largest steamship, the Vanderbilt, to the Union Navy. Secretary of the Navy Gideon Welles refused it, thinking its operation and maintenance too expensive for what he expected to be a short war.

When the Confederate ironclad Virginia (popularly known in the North as the Merrimack) wrought havoc with the Union blockading squadron at Hampton Roads, Virginia, Secretary of War Edwin Stanton and President Abraham Lincoln called on Vanderbilt for help. This time he succeeded in donating the Vanderbilt to the Union navy, equipping it with a ram and staffing it with handpicked officers.

For donating the Vanderbilt, he was awarded a Congressional Gold Medal. Vanderbilt also paid to outfit a major expedition to New Orleans. He suffered a grievous loss when George Washington Vanderbilt, his youngest and favorite son, and heir apparent, a graduate of the United States Military Academy, fell ill and died without ever seeing combat.

Though Vanderbilt had relinquished his presidency of the Stonington Railroad during the California gold rush, he took an interest in several railroads during the 1850s, serving on the boards of directors of the Erie Railway, the Central Railroad of New Jersey, the Hartford and New Haven, and the New York and Harlem (popularly known as the Harlem). In 1863, Vanderbilt took control of the Harlem in a famous stockmarket corner, and was elected its president. He later explained that he wanted to show that he could take this railroad, which was generally considered worthless, and make it valuable. 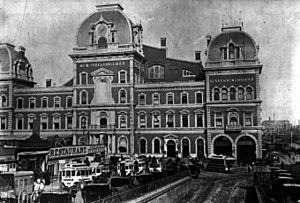 Looking out the north end of the Murray Hill Tunnel towards the station in 1880; note the labels for the New York, Harlem and New York, and New Haven Railroads; the New York Central and Hudson River was off to the left. The two larger portals on the right allowed some horse-drawn trains to continue further downtown

Once in charge of the Harlem, Vanderbilt encountered conflicts with connecting lines. In each case, the strife ended in a battle that Vanderbilt won. He bought control of the Hudson River Railroad in 1864, the New York Central Railroad in 1867, and the Lake Shore and Michigan Southern Railway in 1869. He later bought the Canada Southern as well. In 1870, he consolidated two of his key lines into the New York Central and Hudson River Railroad, one of the first giant corporations in United States history.

In 1869, Vanderbilt directed the Harlem to begin construction of the Grand Central Depot on 42nd Street in Manhattan. It was finished in 1871, and served as his lines' terminus in New York. He sank the tracks on 4th Avenue in a cut that later became a tunnel, and 4th Avenue became Park Avenue. The depot was replaced by Grand Central Terminal in 1913. 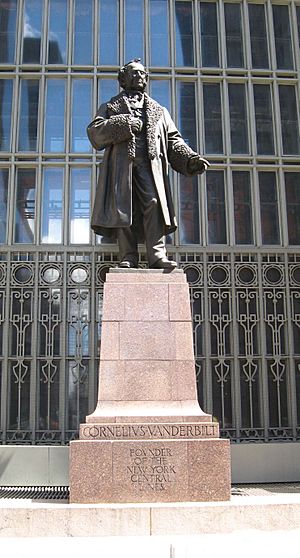 Cornelius Vanderbilt died on January 4, 1877, at his residence, No. 10 Washington Place, after having been confined to his rooms for about eight months. The immediate cause of his death was exhaustion, brought on by long suffering from a complication of chronic disorders. At the time of his death, aged 82, Vanderbilt had a fortune estimated at $100 million.

According to The Wealthy 100 by Michael Klepper and Robert Gunther, Vanderbilt would be worth $143 billion in 2007 United States dollars if his total wealth as a share of the nation's gross domestic product (GDP) in 1877 (the year of his death) were taken and applied in that same proportion in 2007. This would make him the second-wealthiest person in United States history, after Standard Oil co-founder John Davison Rockefeller (1839–1937). Another calculation, from 1998, puts him in third place, after Andrew Carnegie.

Cornelius Vanderbilt was buried in the family vault in the Moravian Cemetery at New Dorp on Staten Island. He was later reburied in a tomb in the same cemetery constructed by his son Billy. Three of his daughters and son, Cornelius Jeremiah Vanderbilt, contested the will on the grounds that their father was of unsound mind. The court battle lasted more than a year and was ultimately won outright by Billy. A surviving descendant is his great-great-granddaughter Gloria Vanderbilt, a renowned fashion designer. Her youngest son is Anderson Cooper, a television news anchor. Through Billy's daughter Emily Thorn Vanderbilt, another descendant is actor Timothy Olyphant.

All content from Kiddle encyclopedia articles (including the article images and facts) can be freely used under Attribution-ShareAlike license, unless stated otherwise. Cite this article:
Cornelius Vanderbilt Facts for Kids. Kiddle Encyclopedia.