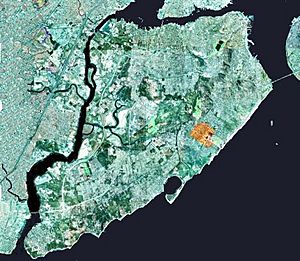 The approximate area of the neighborhood of New Dorp on Staten Island is shown highlighted in orange. 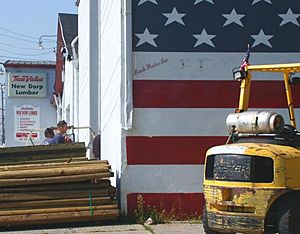 New Dorp – an anglicization of Nieuw Dorp, Dutch for New Village – is a neighborhood in Staten Island, one of the five boroughs of New York City, United States. The community lies near the foot of Todt Hill, with Grant City immediately to its north, Oakwood bordering to the south, and New Dorp Beach bordering on the east.

Formerly one of the most important towns on the island before suburbanization, it was the center of much activity during the American Revolution. Despite surrounding development, the neighborhood has retained its distinct character as a town, and is one of the most thriving commercial centers on the Island which in the 1960s spread along Hylan Boulevard from New Dorp Lane and led to the construction of five shopping centers, anchored by supermarkets and department stores, with the largest being Hylan Plaza which opened in 1966.

Like all of Staten Island, the area of New Dorp was populated by American Indians going back over 10,000 years. At the time of the arrival of the Europeans in the 17th Century, it was inhabited primary by the Raritans and other subgroups of the Lenape tribe.

The first recorded European settlement of the area was in 1671. The English, after having taken over the New Netherland colony from the Dutch, expanded the previous Dutch settlements along the South Shore at Oude Dorp ("Old Village") which had been established ten years earlier. In the late 19th century, it became the home to members of the prominent Vanderbilt family, many of whom are buried here in the Moravian Cemetery. The Vanderbilt farm was later used by the U.S. Army, as Miller Air Field and in the 1970s became part of Gateway National Recreation Area.

One of New Dorp's biggest shopping plazas is Hylan Plaza, home to a few big stores and numerous small shops.

Dugan Park is a large park in New Dorp. The park was named after Gerard P. Dugan in 1974 when it was renovated. The park is often referred to as Tysens Park since it is right off of Tysens Lane and because it is right across the street from the Tysens Apartments, a large housing complex. The park is usually crowded with people from nearby schools as well as people from the apartments nearby. The park contains a large field with 2 baseball/soft fields where leagues come play almost every weekend during the summer. There are 2 basketball courts, handball courts and jungle gyms for younger kids.

One of the most iconic settings in American cinema history, the Corleone family home in Francis Ford Coppola's The Godfather, was filmed at 110 Longfellow Ave. on Emerson Hill.

All content from Kiddle encyclopedia articles (including the article images and facts) can be freely used under Attribution-ShareAlike license, unless stated otherwise. Cite this article:
New Dorp, Staten Island Facts for Kids. Kiddle Encyclopedia.