The library has branches in the boroughs of Manhattan, Bronx and Staten Island. The branch libraries are open to the general public. 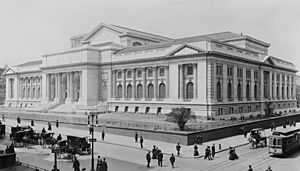 The size and importance of the library grew along with the city.

All content from Kiddle encyclopedia articles (including the article images and facts) can be freely used under Attribution-ShareAlike license, unless stated otherwise. Cite this article:
New York Public Library Facts for Kids. Kiddle Encyclopedia.