Ezra Jack Keats (March 11, 1916 – May 6, 1983) was an American writer and illustrator of children's books. He won the 1963 Caldecott Medal for illustrating The Snowy Day, which he also wrote. Keats wrote A Letter to Amy and Hi, Cat! but he was most famous for The Snowy Day. It is considered one of the most important American books of the 20th century.

Keats is best known for introducing multiculturalism into mainstream American children's literature. He was one of the first children’s book authors to use an urban setting for his stories and he developed the use of collage as a medium for illustration.

My Dog Is Lost was Keats' first attempt at writing his own children's book, co-authored with Pat Cherr, in 1960. The main character, Juanito, is an eight-year-old Spanish speaker newly arrived in New York City from Puerto Rico who has lost his dog. Searching throughout the city, he is helped by children in Chinatown, Little Italy, Park Avenue and Harlem. In this early work, Keats incorporated Spanish words into the story and featured minority children as central characters.

Two years later, Viking published The Snowy Day, which received the Caldecott Medal for the most distinguished picture book for children in 1963. The story follows a very young boy named Peter as he spends a day playing in the snow. Peter is African-American, although his race is never mentioned. Peter was inspired by a Life magazine clipping from 1940. Keats wrote, "Then began an experience that turned my life around — working on a book with a black kid as hero. None of the manuscripts I'd been illustrating featured any black kids — except for token blacks in the background. My book would have him there simply because he should have been there all along."

After years of illustrating books written by others, Keats found a voice of his own through Peter. The techniques that give The Snowy Day its unique look — collage with cutouts of patterned paper fabric and oilcloth; handmade stamps; spatterings of India ink with a toothbrush — were methods Keats had never used before. "I was like a child playing," he wrote. "I was in a world with no rules." The Snowy Day was one of 22 books written and illustrated by Keats, and more than any other, became a classic of children's literature.

Peter appears in a total of seven books, during which he grows and matures: Whistle for Willie, Peter's Chair, A Letter to Amy, Goggles!, Hi, Cat! and Pet Show!. Keats skillfully weaves into his plots a sense of the dilemmas and even dangers his protagonists face. In The Snowy Day Peter, about four years old, yearns to join a snowball fight but learns he is too small when a stray snowball knocks him down. Later, he learns how to assume the role of older brother (Peter's Chair), to stand up to his friends when he invites a girl to his birthday party (A Letter to Amy), and to avoid the violence of a gang of older boys (Goggles!).

One of Keats' signature story elements is that the children in his books are consistently challenged with real problems that are recognizable to young readers; in solving them, the characters learn and mature. In a later series of four books beginning with Louie, Keats introduces a silent, lonely and brooding child who responds to a puppet during a puppet show with a joyous Hello! Louie lives largely in his imagination, constructing a diorama in a shoebox and escaping into it in The Trip, and building a spaceship out of detritus and traveling among the planets in Regards to the Man in the Moon. But he is resilient enough to search for a candidate for a stepfather, and find one, in Louie's Search, and to learn to stand up to taunts from other children. Keats has said that Louie is the character he most related to, having felt invisible and unloved as a child and escaping through his creative pursuits.

Many of Keats' stories portray family life and the simple pleasures in a child's daily routine. 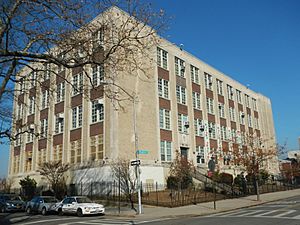 Among the many honors Keats received for his 20-year contribution to children’s literature are:

All content from Kiddle encyclopedia articles (including the article images and facts) can be freely used under Attribution-ShareAlike license, unless stated otherwise. Cite this article:
Ezra Jack Keats Facts for Kids. Kiddle Encyclopedia.