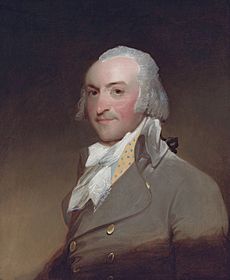 John Jacob Astor (July 17, 1763 – March 29, 1848), born Johann Jakob Astor, was a German-American businessman. He was born in Germany and moved to London and then to New York City in 1784. He started a business trading furs. By 1800, he had made half a million dollars trading furs. His company was called The Pacific Fur Trading Company. In the early 1800s, his company was trading furs in Oregon. His fur traders found the pass through which the Oregon Trail passes. He made even more money in New York real estate. When he died in 1848, he was worth over $50 million. Today, his fortune would be over $150 billion. The city of Astoria, Oregon was named for him. So was the neighborhood Astoria, Queens and Astor Place in Manhattan.

All content from Kiddle encyclopedia articles (including the article images and facts) can be freely used under Attribution-ShareAlike license, unless stated otherwise. Cite this article:
John Jacob Astor Facts for Kids. Kiddle Encyclopedia.