Though it approaches a mile and a half high, South Pass is the lowest point on the Continental Divide between the Central and Southern Rocky Mountains. The passes furnish a natural crossing point of the Rockies. The historic pass became the route for emigrants on the Oregon, California, and Mormon trails to the West during the 19th century. It was designated as a U.S. National Historic Landmark on January 20, 1961. 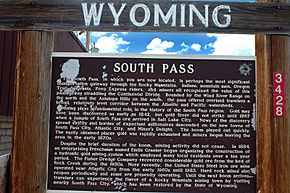 The 1812 discovery of the pass, by European Americans, as a natural crossing point of the Rockies was a significant but surprisingly difficult achievement in the westward expansion of the United States. Because the Lewis and Clark Expedition was searching for a water route across the Continental Divide, it did not learn of South Pass from any Native Americans in the area. Instead, the expedition followed a northerly route up the Missouri River, crossing the Rockies over difficult passes in the Bitterroot Range in Montana.

In 1812 Robert Stuart and six companions from the Pacific Fur Company (the Astorians) happened to cross the Rockies at this point, while trying to avoid Indians further north, on their return to Saint Louis, Missouri from Astoria, Oregon. In 1856 Ramsay Crooks, one of the party, wrote a letter describing their journey:

"In 1811, the overland party of Mr. Astor's expedition, under the command of Mr. Wilson P. Hunt, of Trenton, New Jersey, although numbering sixty well armed men, found the Indians so very troublesome in the country of the Yellowstone River, that the party of seven persons who left Astoria toward the end of June, 1812, considering it dangerous to pass again by the route of 1811, turned toward the southeast as soon as they had crossed the main chain of the Rocky Mountains, and, after several days' journey, came through the celebrated 'South Pass' in the month of November, 1812."

"Pursuing from thence an easterly course, they fell upon the River Platte of the Missouri, where they passed the winter and reached St. Louis in April, 1813."

"The seven persons forming the party were Robert McClelland of Hagerstown, who, with the celebrated Captain Wells, was captain of spies under General Wayne in his famous Indian campaign, Joseph Miller of Baltimore, for several years an officer of the U. S. Army, Robert Stuart, a citizen of Detroit, Benjamin Jones, of Missouri, who acted as huntsman of the party, Francois LeClaire, a halfbreed, and André Valée, a Canadian voyageur, and Ramsay Crooks, who is the only survivor of this small band of adventurers." (Letter of Ramsay Crooks to the Detroit Free Press, June 28, 1856) 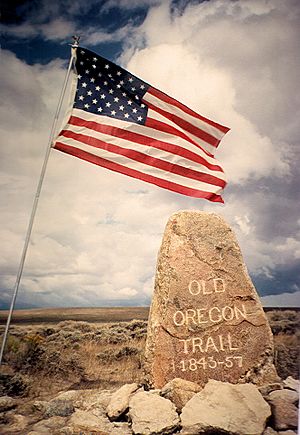 During the 20th century, Oregon Trail boosters marked the trailway with monuments. Ezra Meeker erected this boulder near Pacific Springs on Wyoming's South Pass in 1906.

Despite Stuart's meticulous journal of the trip, which he presented to Astor and President James Madison, and published in France, the location of the South Pass did not become widely known. For more than a decade, European-American trappers continued to use a longer, more northern route. It included an extra mountain range to be crossed and had a shorter season for crossing.

In 1823 a St. Louis merchant named W. H. Ashley led a party up the Sweetwater to its source, rediscovered the pass, and spent the summer in its vicinity trapping. He returned again in 1824, this time going as far as Great Salt Lake and setting up a trading post there, which after three profitable years he sold to the Rocky Mountain Fur Company, headed by Jedediah Smith, William Sublette, and David Jackson.

In 1832 Captain Benjamin Bonneville and a caravan of 110 men and 20 wagons became the first group to take wagons over the pass. In July 1836, Narcissa Whitman and Eliza Spalding were the first white pioneer women to cross South Pass. Between 1848 and 1868, South Pass was the preferred crossing point for emigrants westward, most of whom followed the Sweetwater River across Wyoming to its headwaters, following the Central Route. Before the railroads offered an easier crossing in 1869, perhaps half a million emigrants would trek through South Pass.

Gold had been discovered in the gulches near the pass as early as 1842. However, it was not until 1867, when an ore sample was transported to Salt Lake City, that an influx of miners descended into the region. The gold rush led to the establishment of booming mining communities such as South Pass City and Atlantic City. The placer gold in the streams was exhausted quickly, however, and by 1870 the miners began leaving the region. In 1884, Emile Granier, a French mining engineer, established a hydraulic drilling operation that allowed gold mining to continue. Gold mining was revived in nearby Rock Creek in the 1930s. Additionally, from the 1960s through 1983, a US Steel iron ore mine operated in Atlantic City.

South Pass was designated a national historic landmark in 1961.

Wyoming Highway 28 traverses the modern pass, roughly following the route of the Oregon Trail. Wagon ruts are still clearly visible at numerous sites within a few miles of the highway.

All content from Kiddle encyclopedia articles (including the article images and facts) can be freely used under Attribution-ShareAlike license, unless stated otherwise. Cite this article:
South Pass (Wyoming) Facts for Kids. Kiddle Encyclopedia.