Astoria is the seat of Clatsop County, Oregon, United States. Situated near the mouth of the Columbia River, the city was named after the American investor John Jacob Astor. His American Fur Company founded Fort Astoria at the site in 1811, 210 years ago. Astoria was incorporated by the Oregon Legislative Assembly on October 20, 1876.

It holds the distinction of being the first permanent United States settlement on the Pacific coast and for having the first U.S. post office west of the Rocky Mountains.

Located on the south shore of the Columbia River, the city is served by the deepwater Port of Astoria. Transportation includes the Astoria Regional Airport with U.S. Route 30 and U.S. Route 101 as the main highways, and the 4.1-mile (6.6 km) Astoria–Megler Bridge connecting to neighboring Washington across the river. The population was 9,477 at the 2010 census.

The Lewis and Clark Expedition spent the winter of 1805–06 at Fort Clatsop, a small log structure south and west of modern-day Astoria. The expedition had hoped a ship would come by to take them back east, but instead they endured a torturous winter of rain and cold, later returning the way they came. Today the fort has been recreated and is now a historical park. 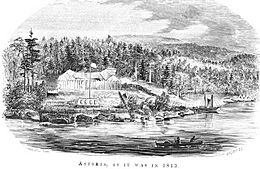 In 1811, British explorer David Thompson, the first person known to have navigated the entire length of the Columbia River, reached the partially constructed Fort Astoria near the mouth of the river. He arrived just two months after the Pacific Fur Company's ship, the Tonquin. The fort constructed by the Tonquin party established Astoria as a U.S., rather than a British, settlement. It became a vital post for American exploration of the continent and was later used as an American claim in the Oregon boundary dispute with European nations.

The Pacific Fur Company, a subsidiary of John Jacob Astor's American Fur Company, was created to begin fur trading in the Oregon Country. During the War of 1812, in 1813, the company's officers sold its assets to their Canadian rivals, the North West Company. The fur trade would remain under British control until U.S. pioneers following the Oregon Trail began filtering into the town in the mid-1840s. The Treaty of 1818 established joint U.S. – British occupancy of the Oregon Country.

Washington Irving, a prominent American writer with a European reputation, was approached by John Jacob Astor to mythologize the three-year reign of his Pacific Fur Company. Astoria (1835), written while Irving was Astor's guest, cemented the importance of the region in the American psyche. In Irving's words, the fur traders were "Sinbads of the wilderness", and their venture was a staging point for the spread of American economic power into both the continental interior and into the Pacific.

As the Oregon Territory grew and became increasingly more colonized by Americans, Astoria likewise grew as a port city near the mouth of the great river that provided the easiest access to the interior. The first U.S. post office west of the Rocky Mountains was established in Astoria in 1847 and official state incorporation in 1876.

Astoria attracted a host of immigrants beginning in the late 19th century: Nordic settlers, primarily Finns, and Chinese soon became larger parts of the population. The Finns mostly lived in Uniontown, near the present-day end of the Astoria–Megler Bridge, and took fishing jobs; the Chinese tended to do cannery work, and usually lived either downtown or in bunkhouses near the canneries. By the late 1800s, 22% of Astoria's population was Chinese.

In 1883, and again in 1922, downtown Astoria was devastated by fire, partly because it was mostly wood and entirely raised off the marshy ground on pilings. Even after the first fire, the same format was used, and the second time around the flames spread quickly again, as collapsing streets took out the water system. Frantic citizens resorted to dynamite, blowing up entire buildings to stop the fire from going further. 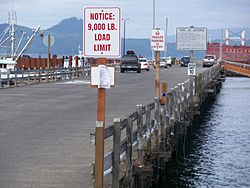 Astoria has served as a port of entry for over a century and remains the trading center for the lower Columbia basin, although it has long since been eclipsed by Portland, Oregon, and Seattle, Washington, as an economic hub on the coast of the Pacific Northwest. Astoria's economy centered on fishing, fish processing, and lumber. In 1945, about 30 canneries could be found along the Columbia; however, in 1974, the Bumblebee Seafood corporation moved its headquarters out of Astoria and gradually reduced its presence until closing its last Astoria cannery in 1980. The lumber industry likewise declined; Astoria Plywood Mill, the city's largest employer, closed in 1989, and the Burlington Northern and Santa Fe Railway discontinued service to Astoria in 1996. 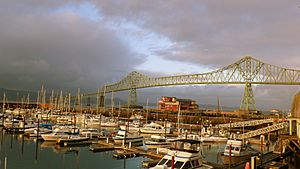 From 1921 to 1966, a ferry route across the Columbia River connected Astoria with Pacific County, Washington. In 1966, the Astoria–Megler Bridge was opened. The bridge completed U.S. Route 101 and linked Astoria with Washington on the opposite shore of the Columbia, replacing the ferry service.

Today, tourism, Astoria's growing art scene, and light manufacturing are the main economic activities of the city. Logging and fishing persist, but at a fraction of their former levels. It is a port of call for cruise ships since 1982, after $10 million in pier improvements to accommodate these larger ships. To avoid Mexican ports of call during the Swine Flu outbreak of 2009, many cruises were re-routed to include Astoria. The residential community The World visited Astoria in June 2009. The town's seasonal sport fishing tourism has been active for several decades 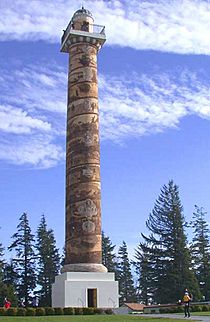 In addition to the replicated Fort Clatsop, another point of interest is the Astoria Column, a tower 125 feet (38 m) high, built atop Coxcomb Hill above the town, with an inner circular staircase allowing visitors to climb to see a panoramic view of the town, the surrounding lands, and the Columbia flowing into the Pacific. The tower was built in 1926 with financing by the Great Northern Railway and Vincent Astor of the Astor family, the great-grandson of John Jacob Astor, in commemoration of the city's role in the family's business history and the region's early history.

Since 1998, artistically-inclined fishermen and women from Alaska and the Pacific Northwest have traveled to Astoria for the Fisher Poets Gathering, where poets and singers tell their tales to honor the fishing industry and lifestyle.

Astoria is also the western terminus of the TransAmerica Bicycle Trail, a 4,250 miles (6,840 km) coast-to-coast bicycle touring route created in 1976 by the Adventure Cycling Association.

Astoria lies within the Mediterranean climate zone (Köppen Csb), with very mild temperatures year-round, some of the most consistent in the contiguous United States; winters are mild for this latitude (it usually remains above freezing at night) and wet. Summers are cool, although short heat waves can occur. Rainfall is most abundant in late fall and winter and is lightest in July and August, averaging approximately 67 inches (1,700 mm) of rain each year. Snowfall is relatively rare, occurring in only three-fifths of years. Nevertheless, when conditions are ripe, significant snowfalls can occur.

Astoria is tied with Lake Charles, Louisiana, and Port Arthur, Texas, as the most humid city in the contiguous United States. The average relative humidity in Astoria is 89% in the morning and 73% in the afternoon.

There were 4,288 households of which 24.6% had children under the age of 18 living with them, 37.9% were married couples living together, 10.8% had a female householder with no husband present, 4.3% had a male householder with no wife present, and 47.0% were non-families. 38.8% of all households were made up of individuals and 15.1% had someone living alone who was 65 years of age or older. The average household size was 2.15 and the average family size was 2.86.

5.98% of the population were Hispanic or Latino of any race.

There were 4,235 households out of which 28.8% had children under the age of 18 living with them, 43.5% were married couples living together, 11.2% had a female householder with no husband present, and 41.7% were non-families. 35.4% of all households were made up of individuals and 13.6% had someone living alone who was 65 years of age or older. The average household size was 2.26 and the average family size was 2.93.

In the city the population was spread out with: 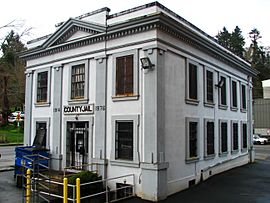 The old Clatsop County Jail, used in the first scene of the film The Goonies. The site is now home to the Oregon Film Museum.

Shanghaied in Astoria is a musical about Astoria's history that has been performed in Astoria every year since 1984.

Astoria was the setting of the 1985 film The Goonies, which was filmed on location. Other movies filmed in Astoria include Short Circuit, The Black Stallion, Kindergarten Cop, Free Willy, Free Willy 2: The Adventure Home, Teenage Mutant Ninja Turtles III, Benji the Hunted, The Ring Two, Into the Wild, The Guardian and Cthulhu.

The early 1960s television series Route 66 filmed the episode entitled "One Tiger to a Hill" in Astoria; it was broadcast on September 21, 1962.

Pop punk band The Ataris' fourth album was titled So Long, Astoria as an allusion to The Goonies. A song of the same title is the album's first track. The album's back cover features news clippings from Astoria, including a picture of the port's water tower from a 2002 article on its demolition.

Two US Navy Cruisers were named USS Astoria: A New Orleans-class heavy cruiser (CA-34) and a Cleveland-class light cruiser (CL-90). The former was lost in combat in August 1942 at the World War II Pacific Ocean Battle of Savo Island, and the latter was scrapped in 1971 after being removed from active duty in 1949. 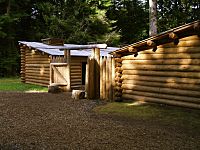 The replica of Fort Clatsop.

Astoria has one sister city, as designated by Sister Cities International:

All content from Kiddle encyclopedia articles (including the article images and facts) can be freely used under Attribution-ShareAlike license, unless stated otherwise. Cite this article:
Astoria, Oregon Facts for Kids. Kiddle Encyclopedia.