Fort Stevens was an American military installation that guarded the mouth of the Columbia River in the state of Oregon. Built near the end of the American Civil War, it was named for a slain Civil War general and former Washington Territory governor, Isaac I. Stevens. The fort was an active military reservation from 1863–1947. It is now listed on the National Register of Historic Places. 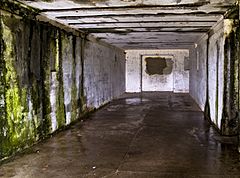 Interior of the abandoned fort

The fort was constructed in 1863-64 during the Civil War as an earthwork battery on the south shore of the mouth of the Columbia River, and was known as the Fort at Point Adams. It was later Fort Stevens in 1865, in honor of the former territorial governor of Washington, Isaac Stevens, who had been killed in action. Fort Stevens was the primary military installation in what became the "Three Fort Harbor Defense System" at the mouth of the Columbia River. The other forts were the Post at Cape Disappointment, later Fort Cape Disappointment and later Fort Canby, built at the same time as Fort Stevens, and Fort Columbia, built between 1896 and 1904. Both are on the Washington side of the river. The fort was meant to defend the mouth of the Columbia from potential British attack during the Pig War of 1859 and subsequent ongoing regional tensions through 1870 in the San Juan Islands, and was important during the 1896-1903 Alaska Boundary Dispute, when British-American tensions again were high and the two countries were on the brink of war.

In 1906, the crew of the sailing ship Peter Iredale took refuge at Fort Stevens, after she ran aground on Clatsop Spit. The wreck is visible today, within the boundaries of Fort Stevens State Park.

After WWI, the U.S. Navy established a radio station onboard Ft. Stevens for communication with the fleet. Additionally, in 1932 the Navy co-located a secret radio intercept station at Ft. Stevens to listen-in on Japanese navy coded messages. Specially trained radiomen from the "On-the-Roof-Gang" were stationed to the listening post. The station was designated "S" because of the Ft. Stevens location. In September 1939, the U.S. Navy relocated Station S to Fort Ward on Bainbridge Island, Washington because of better intercept conditions.

On the night of June 21–22, 1942, the Japanese submarine I-25 surfaced off Fort Stevens and fired 17 shells from her 14 cm-calibre deck gun, making Fort Stevens the first military installation in the Contiguous United States to come under enemy fire in World War II. The Japanese attack caused no damage to the fort itself, it only destroyed the backstop of the post's baseball field.

Fort Stevens was decommissioned in 1947. All the armaments were removed and buildings were auctioned. The grounds were transferred to the Corps of Engineers, until finally being turned over to the Oregon Parks and Recreation Department.

The large state park boasts full hook up campsites, primitive and electrical sites, yurts, and deluxe cabins, most are pet friendly. The campgrounds have full use facilities nearby and there are over nine miles of paved bicycle trails, fishing, a historic shipwreck, and underground tours of the military battery.

Fort Stevens was featured on an episode of Ghost Adventures entitled "Graveyard of the Pacific: Commander's House" that aired in 2018 on the Travel Channel. The team of paranormal investigators explored Battery Mishler, one of the artillery stations with underground tunnels at the fort where eyewitnesses report seeing a male shadow figure in the Magazine room. The fort is also said to be haunted by a soldier (August Stallberger) who was mysteriously beaten to death by "person(s) unknown" while on duty in 1868.

All content from Kiddle encyclopedia articles (including the article images and facts) can be freely used under Attribution-ShareAlike license, unless stated otherwise. Cite this article:
Fort Stevens (Oregon) Facts for Kids. Kiddle Encyclopedia.