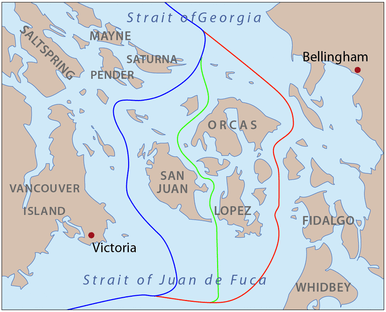 The Pig War was a border dispute in 1859 between the U.S and Great Britain over the San Juan Island on the U.S-British border. This island is occupied by both British and American citizens. In 1859, a pig owned by a British employee of Charles Griffin got onto the farm of an American farmer named Lyman Cutlar. The pig fed on Lyman's potatoes and this made him kill the pig.

All content from Kiddle encyclopedia articles (including the article images and facts) can be freely used under Attribution-ShareAlike license, unless stated otherwise. Cite this article:
Pig War (1859) Facts for Kids. Kiddle Encyclopedia.