Clatsop County is one of the 36 counties in the U.S. state of Oregon. As of the 2020 census, the population was 41,072. The county seat is Astoria. The county is named for the Clatsop tribe of Native Americans, who lived along the coast of the Pacific Ocean prior to European settlement.

Clatsop County comprises the Astoria, OR Micropolitan Statistical Area, or Sunset Empire, and is located in Northwest Oregon.

The Lewis and Clark Expedition stayed for the winter of 1805–6 in the area of the future county at Fort Clatsop. Astoria, Oregon's oldest settlement, was established as a fur trading post in 1811 and named after John Jacob Astor.

Clatsop County was created from the northern and western portions of the original Twality District on June 22, 1844. Until the creation of Vancouver District five days later, Clatsop County extended north across the Columbia into present-day Washington. The Provisional and Territorial Legislatures further altered Clatsop County's boundaries in 1845 and 1853.

Before 1850 most of Clatsop County's government activity occurred in Lexington, a community located where Warrenton is now. However, commercial and social activities came to center on Astoria as that city grew, and an election in 1854 chose Astoria to be the new county seat.

Fort Stevens, located near the peninsula formed by the south shore of the Columbia river and the Pacific Ocean, became the only continental US military installation attacked in World War II, when submarine I-25 of the Imperial Japanese Navy fired 17 rounds at the base June 21, 1942. The submarine escaped when the order was given not to return fire with the 10-inch (250 mm) shore guns. This was done to so that the base position was not given away. While the damage caused was slight (reportedly only a baseball backstop was damaged and a powerline severed), the presence of the enemy ship sowed panic along the Pacific coast of the United States. 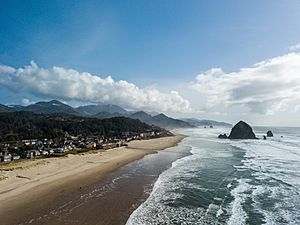 Haystack Rock in Cannon Beach is a popular tourist destination in Oregon.

The principal industries of Clatsop County are manufacturing, travel (primarily tourism), and trade. Fishing and timber are still important but contribute proportionally less to the county's employment and income than they used to. The county's average nonfarm employment was 17,480 in 2007. About 30% of the lands within the county boundaries belong to the state of Oregon, as part of the state forests. The Port of Astoria was created in 1914 to support trade and commerce.

All content from Kiddle encyclopedia articles (including the article images and facts) can be freely used under Attribution-ShareAlike license, unless stated otherwise. Cite this article:
Clatsop County, Oregon Facts for Kids. Kiddle Encyclopedia.