The origins of these mountains began approximately 40 million years ago during the Eocene age. During this time-period, sandstone and siltstone formed in the area. Additionally, igneous rocks and basalt flows combined with basaltic sandstone to create many of the mountainous formations. Other sedimentary rock in the area formed more recently, around 20 million years ago. It is hypothesized that portions of the northern section of the range were islands during parts of the Eocene era. Other portions of the mountains consist of marine sedimentary rock. The entire coast range sits on a convergent tectonic margin interacting with the Juan de Fuca Plate that is subducting beneath North America tectonic plate. Also, weathering and erosion of the region is a major factor in shaping the landscape. Heavy rainfall and landslides have worked to alter the mountains.

The range is part of a broad, plunging structural arch of sedimentary and Tertiary volcanic strata that is being uplifted. Eocene and Miocene sections form the flanks of the uplifted sections. Some of the oldest rocks are submarine tholeiitic basalts from the Eocene era. The basalt came from the basalt flows that covered much of Oregon and originated from volcanoes in the central portion of the state. Other rocks include sandstone, mudstone, and siltstone. It was during the middle Miocene period that the range was uplifted in the broad, northeast-plunging arch. 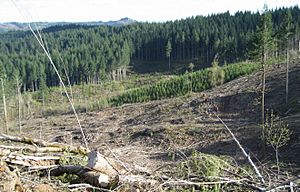 Logging in the mountains 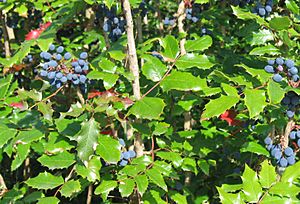 Portions of the range are in the Siuslaw National Forest and Tillamook State Forest, and large sections of the range were burned in forest fires during the 1930s and 1940s as part of the Tillamook Burn. In the forested areas trees include Sitka spruce, western redcedar, Douglas fir, and western hemlock. Other plants that grow in the region are huckleberry, salmonberry, thimbleberry, salal, vine maple, sword and bracken ferns and Oregon grape to name a few.

The range begins at the Columbia River, with some mountainous features on the north side of the river, and continues south roughly 100 miles (160 km) to the Salmon River where Oregon Route 18 traverses the range from the Willamette Valley to the Oregon Coast. The width of the range varies but is roughly 35 miles (56 km).

The climate of the range is moderate because of marine influences, and annual precipitation is heavy, varying from 60 to 180 inches (1,500 to 4,600 mm). 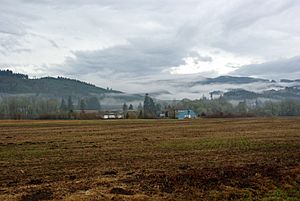 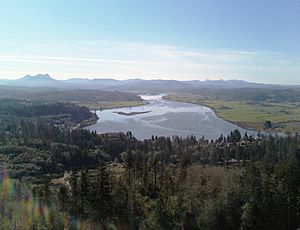 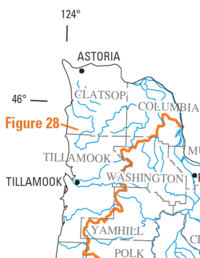 Map of the region with major rivers in blue. Orange line shows divide between watersheds flowing to the east and those flowing north or west.

The following rivers have their headwaters in the Northern Oregon Coast Range:

All content from Kiddle encyclopedia articles (including the article images and facts) can be freely used under Attribution-ShareAlike license, unless stated otherwise. Cite this article:
Northern Oregon Coast Range Facts for Kids. Kiddle Encyclopedia.