The Central Oregon Coast Range is the middle section of the Oregon Coast Range, in the Pacific Coast Ranges physiographic region, and located in the west-central portion of the state of Oregon, United States roughly between the Salmon River and the Umpqua River and the Willamette Valley and the Pacific Ocean. This approximately 90-mile (140 km) long mountain range contains mountains as high as 4,097 feet (1,226 m) for Marys Peak. Portions of the range are inside the Siuslaw National Forest and three wilderness areas exist as well: Drift Creek Wilderness, Cummins Creek Wilderness and Rock Creek Wilderness.

The underlying rock of the Central Coast Range are the igneous rocks from the Siletz River Volcanics of the Paleocene age. It is estimated that this rock formation is up to 16 miles (26 km) thick. These formations consist mainly of pillow basalt, large lava flows, tuff-breccia, and sills. This part of the mountains are approximately 50 to 60 million years old. It is theorized that the source of these lava flows came from oceanic islands that formed over a tectonic hotspot. The entire Oregon Coast Range overlies a convergent tectonic margin that interacts with the Juan de Fuca Plate that is being sub-ducted beneath the North America tectonic plate. This is the Cascadia subduction zone that has experienced uplift for several million years. Currently it is part of a large forearc basin that extends for much of the entire Coast Range on a north-south alignment. Parts of the upper portions of the range contain continental margin deposits from the early Eocene to Paleocene age. Portions of this include marine fossils in the geologic record. Sandstone and shale are also present in the sections of the mountains, with thickness up to 7,875 ft (2,400 m). In the southern part of the range the bedrock is overlaid by Eocene age turbidite sediments and river sediment. The active tectonic forces have created many faults and folds in the range. Additionally, erosion is a major landscape-shaping force for the range. Both heavy rainfall and the resulting landslides have worked to erode and shape the mountains. Much of the landscape is dominated by steep slopes and drainages that are deeply cut into the hillsides from the erosion. Unlike many areas in North America, the mountain range did not see glaciations during the Pleistocene age. 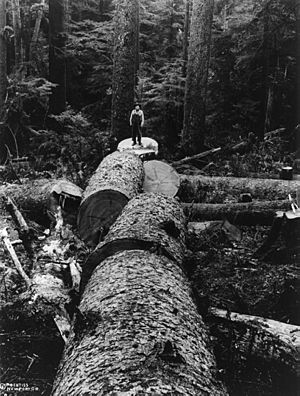 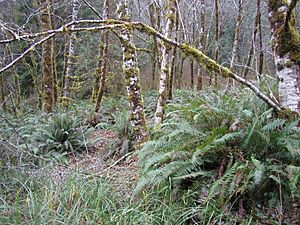 Red alder and sword fern in the Central Coast Range. 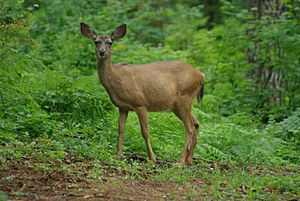 The Oregon Coast Range is home to over 50 mammals, 100 species of birds, and nearly 30 reptiles or amphibians that spent a significant portion of their life cycle in the mountains.

The coast range is inhabited by eleven different species of bats, and they account for nearly 20% of all the mammal species in the range. Species of bats include the Yuma myotis, silver-haired bat, big brown bat, hoary bat, and the long-eared myotis. Other mammals living in the central range include beavers, creeping voles, long-tailed voles, vagrant shrews, deer mice, Pacific jumping mice, western pocket gopher, marsh shrew, shrew-mole, coast-mole, ermine, northern flying squirrel, and Townsend's chipmunk among others.

A large section of the range is covered by the Siuslaw National Forest. Most of the range is forested and mainly within the western hemlock vegetation zone with the overstory of the forest dominated by red alder, western hemlock, western cedar, bigleaf maple, and Douglas-fir trees. In these forested sections, trees include Sitka spruce, western redcedar, Douglas-fir, and western hemlock. The understory of the forest areas contain vine maple, Oregon grape, salmonberry, huckleberry, and sword fern to name a few. Other plants that grow in the region are Pacific madrone, salmonberry, Pacific silver fir, bracken fern, manzanita, thimble-berry, Pacific dogwood, bitter cherry, snowberry, some rose species, and cascara. Additionally, various grass, sedge, and moss species are some of the other plant life growing in the mountain range.

Arthropods include various spiders, millipedes, collembolans, beetles, and a variety of centipedes.

The climate of the mountains is of the mild maritime variety. It is characterized by cool dry summers followed by mild and wet winters. Most precipitation falls in the form of rain, with snow during the winter months at the higher elevations. Annual precipitation varies from 60 to 120 inches (150–300 cm), with more in the higher elevations. The average high temperature in January is 36.3 °F (2.4 °C), and the average high in July is 61.9 °F (16.6 °C) with temperature also varying by elevation. 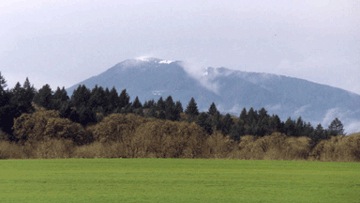 The following rivers have portions of their headwaters in the Central Oregon Coast Range:

All content from Kiddle encyclopedia articles (including the article images and facts) can be freely used under Attribution-ShareAlike license, unless stated otherwise. Cite this article:
Central Oregon Coast Range Facts for Kids. Kiddle Encyclopedia.