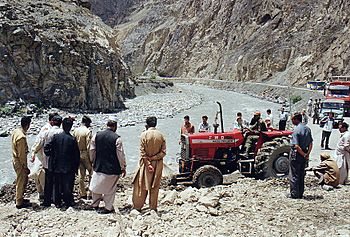 A landslide includes a wide range of ground movement, such as rock falls, deep failure of slopes and shallow debris flows.

The biggest reason for a landslide is always that there is a slope and material goes down the slope because of gravity.

But other things also contribute to landslides:

An underlying reason is the nature of the material. For example, a thixotropic material such as mud or sand and water, can change from a gel to a sol by adding water or pressure, or shaking. It goes from being stable one minute to fluid the next minute. The greatest disasters, like lahars or mudslides, happen suddenly. It is possible for much of a volcano to just slide down suddenly, as with Toba, Krakatoa and Mount St Helens.

All content from Kiddle encyclopedia articles (including the article images and facts) can be freely used under Attribution-ShareAlike license, unless stated otherwise. Cite this article:
Landslide Facts for Kids. Kiddle Encyclopedia.