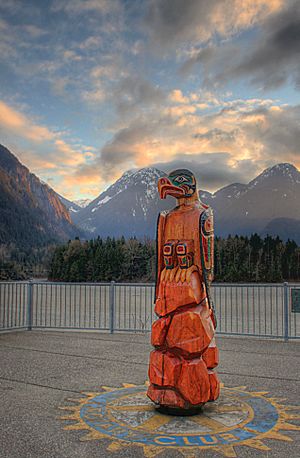 A totem pole in front of the Fraser River in downtown Hope.

Hope is a district municipality in British Columbia, Canada. Hope is in the confluence of both of the Fraser and Coquihalla rivers. As of 2006, 6,185 people lived there. The current mayor of Hope is Laurie French. During World War II there was a internment camp in Hope for the Canadians of Japanese extraction.

All content from Kiddle encyclopedia articles (including the article images and facts) can be freely used under Attribution-ShareAlike license, unless stated otherwise. Cite this article:
Hope, British Columbia Facts for Kids. Kiddle Encyclopedia.