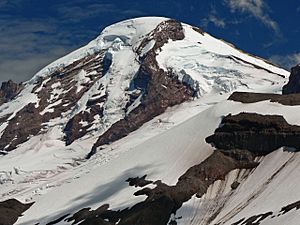 Some of the primary rivers in the North Cascades are the Skagit, Nooksack, Stillaguamish, and Stehekin. Lake Chelan is the largest lake in the North Cascades. Although now termed a reservoir, it was originally a natural lake, but enlarged by a dam. The urban areas of Seattle, Tacoma and Everett are all west of the North Cascades. The Columbia River, Washington's largest river, forms the east and south boundary.

All content from Kiddle encyclopedia articles (including the article images and facts) can be freely used under Attribution-ShareAlike license, unless stated otherwise. Cite this article:
North Cascades Facts for Kids. Kiddle Encyclopedia.